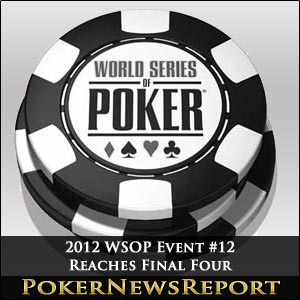 The 152-player field – who created a prize pool of $1,428,800 – was reduced to just 32 by the end of Day 1, while the second day saw us reach the final four, almost certainly ensuring that the planned-for fourth day will not be necessary.

San Jose’s Tommy Chen will take on New York State’s Brian Hastings in semi-final 1, while Jason Mo, of Massachusetts, faces Maryland’s Brock Parker in the second last-four clash in the Brasilia Room of the Rio All-Suite Hotel & Casino as they all eye up the gold bracelet and $371,498 winner’s cheque.

Here’s how the final four – with results from Day 2 – made it to the semi-finals:

Keep up to date, follow the latest WSOP news here, at PokerNewsReport.