Filip Verboven has become the second Belgian within a week to lift a major poker title after he outlasted 253 opponents to win the first event of the Unibet Open series of tournaments in Prague for €100,000. 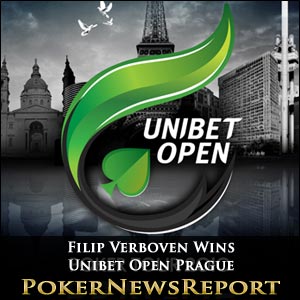 Filip Verboven has become the second Belgian within a week to lift a major poker title after he outlasted 253 opponents to win the first event of the Unibet Open series of tournaments in Prague for €100,000.

Verboven defeated Ruggerio Scommegna after a tough heads-up encounter in the Czech Republic’s capital city that saw the Italian pick up €56,000 for his runner-up spot, while third place went to Dutchman Stieven Razab-Sekh for €37,700.

Verboven entered the nine-handed final table as chip leader, but lost that to Scommegna as the day progressed to their heads-up clash, only to scratch away until recovering the upper hand.

Verboven called to see the 8♣ arrive on the turn, prompting Scommegna to shove all-in. Verboven took a little time to consider his options before calling to reveal his hole cards of 9♦ 8♦ to have second pair and a flush draw.

Scommegna, meanwhile, placed J♠ 2♠ down for bottom pair, meaning he had to improve dramatically to stay alive.

However, the Q♥ on the river was not one of the cards the Italian needed – and that was that for the event.

Razab-Sekh exited in third place when losing out to Scommegna. On the button, Verboven limped into the pot, while Razab-Sekh called and big blind Scommegna checked to see a flop of 4♥ 8♥ 9♠.

Razab-Sekh checked, Scommegna bet 75,000 and Verboven folded. Razab-Sekh then shoved all-in for approximately 574,000, leaving Scommenga to think for about 60 seconds before also calling to show A♠ 9♦.

Razab-Sekh revealed K♦ 9♥ ahead of the 10♠ arriving on the turn, to be followed by the river 6♣ to give Scommegna the chip lead heading into his head-to-head with Verboven.

However, Grajzel replied by going all-in and Verboven, who let out a sigh and shrugged his shoulders, called to show 8♥ 8♣ and be faced by Grajzel’s Q♣ 7♥.

Grajzel needed a queen to stay alive, but the 4♣ on the turn and 2♦ on the river ended his tournament as Verboven stacked up more than half the chips at the table.

Van Lancker opened with a 44,000 bet, only for Grajzel to shove all-in. Van Lancker called after a short while to reveal K♣ Q♣ and be dominated by the A♠ Q♥ of Grajzel.

The flop came down Q♥ 3♥ 5♣ to give them both queens, but the 6♠ turn and 3♠ river changed nothing as the ace of Grajzel held.

Poland’s Kozub hit the rail in sixth place after moving all-in pre-flop for 79,000 against Scommegna.

The A♣ on the turn ended Kozub’s tournament, while the 10♠ on the river was only placed to complete the board.

A second Dutchman, Sybrandi, exited in seventh place in a hand with Van Lancker. The Dutch pro, who was under the gun, shoved all-in for about 298,000 and was called by Van Lancker as everyone else mucked.

Romania’s Murariu hit the rail in eighth spot after tangling with Verboven. Sybrandi initially raised to 32,000, with Murariu moving all in for his last 71,000 chips.

However, Verboven re-raised all-in and Sybrandi folded to leave us with Murariu showing Q♣ 10♦ and the Belgian revealing K♥ K♦.

Murariu was a huge underdog and the 2♠ 5♥ 4♠ 6♦ 8♥ did not provide him with any good fortune as Verboven claimed another victim.

Frenchman Guenan was the first final table player to exit in ninth spot as Verboven added to his long list of eliminations.

The action folded all the way to Verboven, who called to show A♣ A♠ and dominate the K♦ 10♥ of Guenan. The board ran out 4♦ 3♥ J♠ 10♠ 9♦ to send the French player to the rail as Verboven increased his chip lead.

The highest placed Brit was Alex ‘Pickleman’ Rousso, who busted out in 13th to take home €3,000.

The Unibet Open now heads off to Paris for the May 3 to 6 stop.