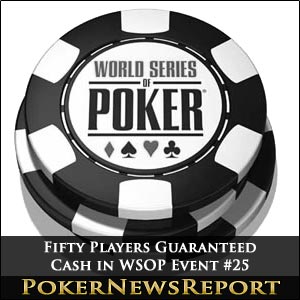 Several other notable pros – including online sensation Viktor ‘Isildur1’ Blom, Maria Ho, McLean Karr, Bryan Devonshire and Barry Greenstein – stayed alive long enough to make it to a heads-up clash, only to unfortunately exit one place from the money.

But other well-known faces did manage to survive for round two today, including New York’s Matt Matros – who picked up his third WSOP gold bracelet by taking down the $1,500 buy-in Six-Handed No-Limit Hold’em event #16 for $454,835 after beating Mark Radoja heads-up – Scott Seiver, Greg ‘FBT’ Mueller, Brock Parker, Ari Engel, JJ Liu, Justin Bonomo, Mike Leah and Victor Ramdin, with all these player guaranteed at least $3,088.

However, they will all be aiming to collect the bracelet and top prize of $116,118 from the $494,100 prize pool at the Rio All-Suite Hotel & Casino, while anyone winning their table later today is assured of earning no less than $7,164 for their troubles.

Those players returning today will take their seats in the Amazon Room of the Rio at 10 five-handed tables, with each winner making the final table.