Chilean poker player, Nicolas Fierro, finished Day 2 of the WSOPE 6-Max Pot Limit Omaha Championship where he started it – on top of the leaderboard – but he took a strange route to maintain his position. 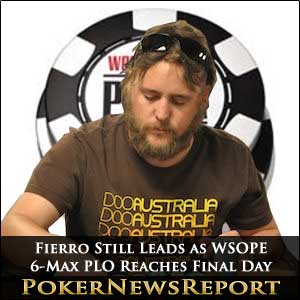 Chilean poker player, Nicolas Fierro, finished Day 2 of the WSOPE 6-Max Pot Limit Omaha Championship where he started it – on top of the leaderboard – but he took a strange route to maintain his position.

Starting the day with a commanding chip stack 50% bigger than anybody else´s, Nicolas Fierro played like a scared rabbit through the early stages as player after player doubled up their short-stacks against his. At one point Fierro was down below the average chip count, but managed to build his stack up again and reclaimed the chip lead when eliminating Rifat Palevic in the last hand of the day.

Inasmuch as Fierro´s demise and rise was interesting to follow, the real story of the day concerned Alexander Dovzhenko. Having just scraped into the bubble on Thursday evening, the Ukrainian poker player started Friday´s action with just 2,800 chips (blinds 400/800). Drawn on a table around which the only decently stacked player was Bryan Devonshire (72,500), Dovzhenko went to work on the other short stacks – contributing to the demise of Roberto Romanello and Jon Eames, before busting Matt Stout. Once the tables had split, Dovzhenko was able to double up against Rifat Palevic, and ended the day in fifth place with 245,000 chips – more than 40 big blinds.

Not an American in Sight!

As well as a Chilean and a Ukrainian, the final table of the WSOPE 6-Max PLO Championship is graced by Canadian Phillippe Boucher, Portugal´s Michel Dattini, South African Jarred Soloman and the UK´s Jack Ellwood. The international flavour (with a “u”) of the field will no doubt delight last year´s WSOPE Main Event winner James Bord, who has offer to refund all losing bets placed on this year´s Main Event with the betting exchange “MatchBook”, should an American player win the feature tournament (Terms and conditions apply – see James Bord for more information!). “Bordy” has been pretty vocal about the strength of “Rest of the World” competition at the WSOPE this year, but possibly his statement that “Europeans are far superior (to Americans)” may be a little over the top.

The final six players will take their seats at 1.00pm European time (12.00 noon in the UK) and will play until one player remains.  Each of the six final tablists has a chance of claiming the €124,584 first prize and Championship bracelet as blinds will be 3,000/6,000 and even the shortest stacked player has enough in front of him for numerous circuits of the button. Bookmark Poker News Report, as we will be covering the conclusion of this Omaha Poker event, the finale of the Mix-Max tournament and the opening days of the Main Event and Ladies Event – the only feature event on the WSOPE calendar which does not award a bracelet to the winner!