Fernando Cimaglia Leaves All in his Wake at WPT Venice 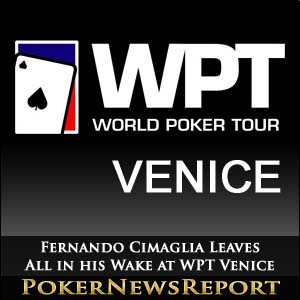 Fernando Cimaglia narrowly missed out on a seat at the final table in this event last year – his first cash in a WPT event – and he must have enjoyed the experience so much that he came back for more.

Irrespective of his finishing position in this year´s tournament, the popular Italian will have a great story to tell his grandchildren, after sinking the gondola of 13-times WSOP Bracelet winner Phil Hellmuth and taking the Day 1B chip lead in the WPT Venice Main Event.

Phil Hellmuth made his typical late entrance to a major event – and possibly his most spectacular yet. Dressed in a theatrical mask, tuxedo and flowing cape, the ‘Poker Brat’ arrived in a gondola and was escorted into the Casino di Venezia by the WPT Royal Flush girls.

Sadly – for Hellmuth at least – his performance lasted no longer than a few hands, as Cimaglia – who was already the chip leader courtesy of a flopped set of Tens against Giuseppe Cristaudo – sent him back into the gloom and mist of Venice.

Hellmuth called and rolled over 8♣ 5♣ for the top pair. Cimaglia turned over J♠ 8♦ for the top pair with a better kicker and, after the Q♥ was dealt on the river, Hellmuth was busted from the tournament – his late and spectacular entrance meaning that there was no opportunity for him to re-enter.

Mixed Fortunes for the Second Bullets

Those who will not be seeing any of that money after entering for a second time include Jackson Genovesi, Gaelle Baumann and Guillaume Darcourt (who lost a Kings v Aces race against re-entry Sandor Demjan), while Ludovic Lacay, Andrea Dato and Martin Staszko all made potentially wise decisions to fire their second bullets, as they still survive among the 91 players who will take their seats for Day 2.

When the Day 1 survivors combine at the Casino di Venezia this afternoon, the WPT Venice Main Event will re-commence on Level 9 (blinds 400/800 – ante 100). Despite Fernando Cimaglia´s successful day yesterday, he will still be 15 big blinds behind Day 1A chip leader Stephen Behm, but has a healthy advantage over the rest of the field.