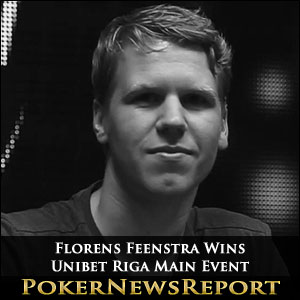 All poker players are aware that “it is not the cards you are dealt that matter, but what you do with them”, and Rens Feenstra benefitted from his heads-up opponent – compatriot Rick Jansen – being more than a little generous with his betting actions in the climax of the Unibet Riga Main Event.

Of course, you also need an element of skill to be involved in the heads-up conclusion of a major tournament; and Feenstra had taken the chip lead during Day 2, to lead the field through the 24-player bubble, and to be at the head of the chip counts when the nine remaining players took their seats at the final table.

With just a few hands left in Level 19 (blinds 6,000/12,000 – ante 1,000) when the Unibet Riga final table got underway at the Royal Casino, the mostly likely candidate to be putting his tournament life on the line was Nicolas Storm; however, it was Imro Sendar who was the first player to be bust – getting into a pre-flop raising war with Rens Feenstra, before committing all his chips to the pot with A♣ K♦. Feenstra made the call with 8♦ 8♣, and Sendar was sent to the rail in ninth place when the dealer delivered a Jack-high board.

Nicolas Storm only survived a few hands more. Down to 48,500 chips, he shoved from the cut-off with A♣ 3♠ and was isolated by Damian Mizinski A♥ 7♥. The 7♣ on the flop, and no miracle cards on the Turn or River, signalled the end of Storm´s participation in the Unibet Riga Main Event in eighth place. In other action, Rick Jansen moved up the leaderboard when doubling up against Jarkko Mammela (Q♦ J♥ > J♠ 8♣ on a flop of 8♥ 9♦ 10♣) and Jens Hansen also improved his position when crippling Kristaps Bertulis A♥ A♣ > A♦ K♠.

Play continued seven-handed for a considerable period of time with little significant action until, just before the close of Level 21 (blinds 10,000/20,000 – ante 2,000), Anders Kjellerup (Q♣ Q♦) moved all-in during the pre-flop betting and received a call from Damian Mizinski (A♥ 8♠). The flop of 7♥ J♣ A♠ put Mizinski´s hand into the lead and, with no drama on the Turn (3♠) or River (5♥), Kjellerup was eliminated from the Unibet Riga Main Event in seventh place.

It is never a good sign when shove the last of your chips into the middle and get two snap callers, but that was what happened to Kristaps Bertulis when he moved all-in with 10♣ 10♥. Rick Jansen made the call from the Small Blind with A♥ A♦ and then Jarkko Mammela moved over the top with K♥ K♣. Jansen paid the extra to see Mammela, and three sets of cards were on their backs. Jansen´s Aces held, and Bertulis and Mammela were bust from the tournament in sixth and fifth places respectively.

Rick Jansen had led a charmed life in the Unibet Riga Main Event – recovering from having just 14,000 chips when the tournament was ten-handed on Day 2, to entering the final table with a workable chip stack courtesy of two successive double-ups and a triple-up – and his luck continued with the elimination of Damian Mizinski in fourth place 2♥ 2♦ > A♦ 3♣, when the board produced four hearts to thwart Mizinski´s paired Ace. Consequently, as play became three-handed, Jansen had more than half of the chips in play:

A full house against Tens Feenstra extended Jansen´s chip lead further, and although Feenstra doubled-up A♣ J♦ > A♥ 9♠ to get back over one million chips, Rick Jansen took a substantial chip lead into the heads-up when busting out Jens Hansen in third place A♥ 6♠ > 10♥ 10♣ by pairing his Ace on the flop and making trip Aces on the River.

Rens Feenstra went into the heads-up against Rick Jansen with an almost 3:1 chip disadvantage, but benefitted from some poor/generous play by his opponent – and a little good Christmas fortune – to overturn the deficit and win the tournament.

In one of the pivotal hands of the heads-up, Rens Feenstra (2♥ 2♠) had been the aggressor before and after the flop of 6♠ Q♦ 10♠. Rick Jansen (Q♣ 5♥) had flopped top pair, but allowed Feenstra to lead the betting after the Turn of 3♦. It was only after the River card (2♦) that Jansen decided to act first – raising to 150,000 chips. Feenstra re-raised to 420,000 chips (more than half his remaining stack) and Jansen made the call – only to see that his top pair had been rivered by Feenstra´s set of Deuces.

Despite the Unibet Riga Main Event having a €1,650 buy-in, the prizes were paid out in Latvian Lats. One Latvian Lat is worth almost US$2 or £1.20 sterling. The prizes in Lats for the players who reached the final table are listed below with their approximate €uro equivalent.