Senators Harry Reid (D-NV) and Jon Kyl (R-AZ) have been working on a proposal to legalize online poker at federal level, but lack support from GOP senators. 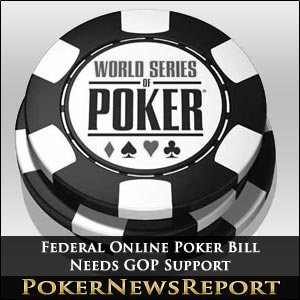 Senators Harry Reid (D-NV) and Jon Kyl (R-AZ) have been working on a proposal to legalize online poker at the federal level, but lack support from GOP senators.

In the absence of federal legislation, Nevada has been making progress with its plans to roll out online poker sites later this year or in early 2013 on an intrastate platform due to the December ruling by the U.S. Department of Justice (DoJ) that found the 1961 Wire Act to be applicable to only sports betting. And with Delaware’s recent enactment of online gambling legislation and other state legislatures contemplating similar proposals, some federal lawmakers are afraid that a patchwork of state-by-state regulations will begin to complicate the issue.

Sen. Kyl and I’ve worked very hard, Reid told the National Journal. What we need to do is get some Republican support. That hasn’t been forthcoming yet.

Reid is hoping that Kyl can persuade his fellow Republican lawmakers into changing their stance on the issue as Kyl has done. The Arizona senator was one of the sponsors of the Unlawful Internet Gambling Enforcement Act (UIGEA) in 2006 that intended to prohibit financial institutions from processing payments from U.S. citizens wishing to gamble online. Kyl has since become a proponent of online gambling legislation at the federal level.

Kyl believes that the DoJ may have erred in its December ruling that has opened the floodgates for states to pursue online gambling legislation. He thinks the law requires further clarification. It’s an opportunity to go back and revise the Wire Act, make sure that everybody knows that it applies to Internet gambling, Kyl said.

The Poker Players Alliance, the main lobbying organization on behalf of poker players, also strongly advocates regulation of online poker at the federal level. That sentiment is echoed by many in the online poker industry, as a state-by-state format could lead to various problems such as lack of player liquidity. Such a situation may prompt players to continue to play at unregulated sites, which is what legislation is aiming to avoid.

It remains to be seen whether Republican lawmakers will change course and vote in favor of federal online poker legislation. However, it is a positive sign that Kyl and Reid continue to work toward that end.