The online poker proposal of Senators Harry Reid and Jon Kyl has been unveiled in its entirety and reveals only one surprise not found in September’s summary. 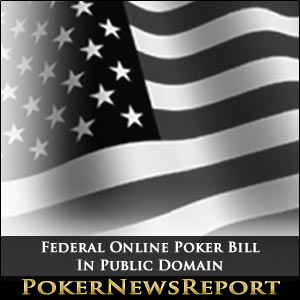 The online poker proposal of Senators Harry Reid and Jon Kyl has been unveiled in its entirety and reveals only one surprise not found in September’s summary.

Players who deposit funds at unauthorizd sites will no longer be penalized, as language to that effect found in the summary has been omitted from the 73-page proposed bill. The bill’s core remains intact; to strengthen the Unlawful Internet Gambling Enforcement Act (UIGEA) and to prohibit games other than poker from being played online.

As touched upon in the summary of the proposal that was leaked last month, operators who apply for an Internet poker license must have owned and operated a U.S. casino for roughly six months (180 days) after the bill is passed. This provision favors existing casinos. However, in order to prevent any one site from getting a huge jump on others, a 15-month waiting or blackout period is in effect.

The Reid-Kyl bill also calls for a qualified body with “demonstrated capabilities relevant to the online poker environment” to be designated. Many believe that Nevada will benefit greatly from this aspect of the proposal, as the Silver State has been busy scrutinizing online poker license applications and is the only state with experience in such matters to date. This part of the proposal is sure to be met with a great deal of opposition.

The original intent of Reid was to have federal gaming centered in Nevada, New Jersey Senator Raymond Lesniak said to eGaming Review. He hasn’t achieved that so he is now trying to stop states like New Jersey from going forward with regulation of their own, which would make his job far more difficult in the future.

Other provisions in the summary proposal remain, such as segregation of player funds, states required to opt-in, tribal gaming interests permitted to participate only if the state in which they reside has opted in, interstate poker allowed and encouraged, but international player pools prohibited. Strict penalties for cheating will be doled out, such as up to three years in prison for using bots. The Office of Online Poker Oversight (OOPO) will be created and charged with overseeing regulations. Online site operators will pay a 16% gross rake tax, of which 14% will be earmarked for states and Indian tribes while the remaining 2% will go to the OOPO to cover expenses.

A five-year ban on any poker sites who continued to offer services in the U.S. following enactment of the UIGEA in 2006 remains in the proposal. This provision is seemingly directed at PokerStars and Full Tilt, who virtually ignored the law and rose to the top of the industry as a result. If PokerStars’ lawyers can prove that no laws were broken while the UIGEA was in effect, then the five-year ban would not be imposed.

It is believed that the Internet Gambling Prohibition, Poker Consumer Protection and Strengthening UIGEA Act of 2012–which also seeks to reverse the U.S Department of Justice ruling in December that allowed states to begin legalizing online poker and gambling on their own–will be introduced in Congress following the Nov. 6 elections. The lame-duck session ends on Dec. 31. Whether the Reid-Kyl bill can garner enough support for passage prior to year’s end remains to be seen.