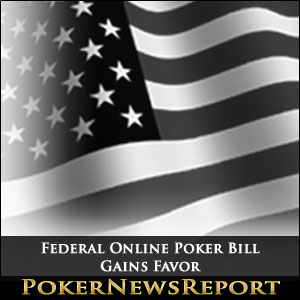 The Internet Poker Freedom Act, also known as H.R. 2666, was introduced by the Texas lawmaker in July. The bill was discussed during Tuesday’s hearing before the House Subcommittee on Commerce, Manufacturing, and Trade. Barton told hearing participants and onlookers that H.R. 2666 was the third such proposal he has introduced in recent years.

Whether the third time will be the charm in getting the bill approved among his fellow lawmakers remains to be seen. Many consider H.R. 2666’s passage to still be a longshot at this point. But it was apparent following the hearing that the odds of Barton’s proposal becoming law are better now than before the hearing began.

This point was made clear by Nebraska Rep. Lee Terry in closing remarks toward the end of the hearing. Terry admitted that he and several of his colleagues did not think much of the poker-only proposal when it first crossed their desks over the summer. But after hearing witness testimony, Terry confessed that he now sees H.R. 2666 in a new light.

Part of the reason for the Nebraska Republican’s shift in attitude may be due to the testimony of both John Pappas of the Poker Players Alliance (PPA) and Geoff Freeman of the American Gaming Association (AGA). Both of the pro-online poker witnesses did an admirable job in setting forth the advantages of legalizing online poker.

Freeman pointed out that online gambling is here to stay and that Americans will find a way to wager online via unregulated sites if there are no regulated websites at their disposal. Such a scenario is not good, however, as lack of regulation also means lack of consumer protections.

Pappas made sure to make it clear that Barton’s proposal is all about protections for players, testifying that H.R. 2666 is regarded as highly safe for consumers. The PPA executive director also hammered home the fact that underaged gamblers have not been able to access gaming websites that are now legally up and running in New Jersey, Delaware and Nevada. Denying children access to the sites is also a top priority in Barton’s bill.

Any concerns or questions that subcommittee members have regarding H.R. 2666 will be put forth in writing to the witnesses who provided testimony at Tuesday’s hearing. It is highly likely that both Pappas and Barton will be quite busy supplying answers to a number of queries from lawmakers.

Let’s hope that the Internet Poker Freedom Act continues to advance and gain favor among legislators over the coming days and weeks. The subcommittee hearing was a step in the right direction in beginning the process. There is still a long way to go for American online poker players who crave for the right to play legally. But the prospects of regulation look much better now than prior to Tuesday’s hearing.