Opposition to the Reid-Kyl federal Internet poker bill that was leaked to the press about two weeks ago has recently been vocalized by several parties. 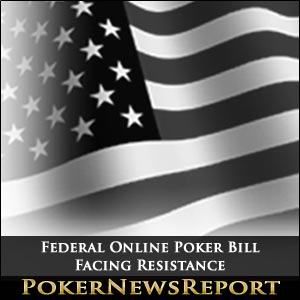 Opposition to the Reid-Kyl federal Internet poker bill that was leaked to the press about two weeks ago has recently been vocalized by several parties.

Chief among them are Indian tribes who are certain to oppose the bill on several fronts, one of which is the provision that allows tribal gaming interests to offer online poker only if the state in which they reside decides to opt-in on the federal scheme. The Senate Committee on Indian Affairs drafted its own bill a few months ago designed to protect tribal business interests that could be hurt by several aspects of the Reid-Kyl proposal.

One tribal interest group, the Augustine Band of Cahuilla Indians Gaming Commission, which has aligned itself with the California Online Poker Association (COPA), believes the proposal will be strongly opposed as it might be good for about half a dozen [tribes] but the rest get screwed, said Michael Lombardi, chairman of the commission, to eGaming Review. Lombardi further stated that anyone from tribal country lobbying in Washington for this bill is a traitor and that the proposal really only benefits a handful of major brands in Nevada.

The tribes are not alone in believing that the proposed bill is weighted heavily toward Nevada and its casinos. The bill carves out regulations for online poker, lottery sales and off-track horse betting, but excludes online casino games. Several states, such as Delaware, which recently approved the Delaware Gaming Competitiveness Act of 2012, are hoping to include casino games in addition to poker in their online gambling offerings.

Delaware is competing with neighboring states to keep the gambling dollars of its residents in-state. The legislation that was signed into law by Delaware Gov. Jack Markell in June allows online casino games, but would become obsolete if the state opted in under Reid and Kyl’s federal plan. That would reduce gaming options for Delaware residents and likely send some of them to out-of-state casinos, which the Competitiveness Act was aiming to prevent. Therefore, Markell and his fellow Delaware Democrats would oppose the bill and be reluctant to opt-in.

Absolutely it would face resistance, University of Delaware professor Tammy Anderson told the college newspaper, the Review. Markell spent a great amount of political capital in getting [the Delaware Gaming Competitiveness Act] accomplished.

Another state not at all pleased with the Reid-Kyl bill is New Jersey, with Sen. Raymond Lesniak urging New Jersey’s Congressional and Senate delegations to fight passage of the bill once he read the draft proposal. Lesniak has been pushing for online gambling legislation in New Jersey for several years that would include online casino games as well as poker.

Reid’s bill would do serious damage to Atlantic City’s chances of recovering from its slump, Lesniak said. I still intend to achieve my plan to regulate online gambling in New Jersey as soon as possible, which would attract an additional $200 million of gross revenues a year for the casino industry and also present a huge opportunity to allow the casinos to market Atlantic City to new customers over the internet. Kyl and Reid are trying to take that away from us.