Fast Poker To Be Launched On European Skins

Just a couple of days after PokerStars announced the release of Zoom Poker, Fast Poker as been announced, a similar version of Full Tilt Poker’s Rush Poker,. 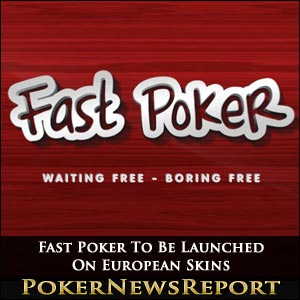 Fast Poker, a similar version of Full Tilt’s “Rush Poker,” is set to be launched on several European poker sites this month.

Coming just a few days after PokerStars announced the release of its own version of FTP’s prototype of quick action online poker called Zoom Poker, Fast Poker will be available on iGame, Unibet, Betsson, Betsafe and 24hpoker.

Fast Poker is developed and produced by Relax Gaming, a Malta-based company with subsidiaries in Estonia and Finland. Relax Gaming is licensed by the Alderney Gambling Control Commission and develops and maintains poker, casino and bingo software used by gaming operators.

“We are thrilled to launch Relax Fast Poker Network together with some of the very leading names in the industry,” said Patrik Österåker, Relax Gaming’s CEO. “We look forward to the launch and are sure more operators will join in. Fast Poker has the potential to make poker really hot again. Its fun, fast and easy, a great way of playing poker.”

Fast Poker enables a pool of players to play quickly and to be moved to a new table upon the folding of their cards at previous tables. Rush Poker was first developed and released in 2010 by Full Tilt. The InstaDeal Poker Network recently launched a similar version on mobile devices.

“This is a major, exciting development in the online poker world which offers players a new, fun spin on poker without losing the essence of game,” said Daniel Eskola, Head of Gaming at Unibet. “We are very much looking forward to strengthening our existing poker offering by working with Relax Gaming and have high hopes that our poker players will enjoy this new poker product.”

With rumors of the sale of Full Tilt near finalization to Group Bernard Tapie, it is believed that Tapie will re-launch Full Tilt soon with its Rush Poker software included. Many poker industry insiders believe that there is room for several fast-paced poker offerings throughout the world of online poker.

“We think that Fast Poker developed by Relax Gaming is a very interesting addition to the poker market and will be interesting to see how our customers will welcome this addition to our poker offering on our brands Betsafe and Betsson,” said Henric Andersson, Director of Business Operations at Betsson.

Its somewhat ironic that a company called Relax Gaming would provide Fast Poker. Anyone who has played Rush Poker knows that it is quite the opposite of relaxing, being constantly moved to new tables and playing an estimated five times more games than a normal paced game of Texas Hold’em. However, many players do seem to enjoy the fast-paced action.