American pro Faraz Jaka returned to the top of the leaderboard after a thrilling Day 4 of the $10,000 buy-in main event at the PokerStars Caribbean Adventure (PCA) was completed. 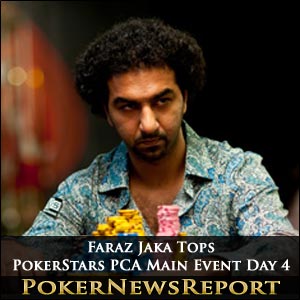 American pro Faraz Jaka returned to the top of the leaderboard after a thrilling Day 4 of the $10,000 buy-in main event at the PokerStars Caribbean Adventure (PCA) was completed.

Jaka, who also chip leader after Day 2, is the only player to pass the three million mark, never mind the fact that he has topped that by more than one million.
That keeps Jaka – who has 11 World Series of Poker (WSOP) cashes to his name – more than 1.4 million ahead of second placed American Alex Fitzgerald, who ended the day on 2,709,000 chips.

Jaka – who picked up $13,760 for finishing sixth in last month’s $5,000 buy-in No-Limit Hold’em event at the 2011 Doyle Brunson Five Diamond World Poker Classic in Las Vegas – must surely be favourite to land the $2 million top prize after building up such a huge lead.

A crucial hand for Jaka arrived when he played a pot with Swedish star Jacobson that took the American above three million in chips.

Jaka – whose biggest payday so far arrived back in July 2009 with second place to Brazil’s Alexandre Gomes in the $15,000 buy-in No-Limit Hold’em Championship Event from the Bellagio Cup V in Vegas for $774,780 – showed J♥ 9♥ for an ace-high flush, resulting in a frustrated Jacobson mucking his hand.

The American was involved in several massive hands – and another notable one came when he faced off and ultimately eliminated Greenberg, of Massachusetts.

Of course, the 6♦ arrived on the river to give Jaka a straight and send Greenberg to the rail in 30th place for $46,000.

Three-time WSOOP bracelet winner Greenstein was the final Team PokerStars Pro still in the tournament before being ousted by Jaka.

The 6♦ came on the river, though, and the pot went to Jaka as Day 4 wound down to a conclusion.

Gregg, meanwhile, is once again looking to make a PCA final table after picking up $1.7 million for finishing as runner-up to Canada’s Poorya Nazari in the $9,700 buy-in No-Limit Hold’em main event back in 2009.

Defending champion Galen Hall, meanwhile, was the first player to hit the rail on Day 4 as he finished in 64th for $32,500.

The San Francisco pro was gone within a few hands of the start when going all-in with 10♥ 10♦ pre-flop against Jacobson.

The American was ahead as the Swede showed K♦ Q♠, but the board of Q♣ 5♦ 5♠ 8♥ J♠ gave Jacobson the better two pair – and that was Hall finished.

Sensational Spanish golf pro Sergio Garcia – who has 22 titles and over $38 million in winnings from his 12-year career on the Professional Golfers’ Association (PGA) Tour – also found the going too tough on Day 4 and was eliminated in 51st for $35,000.

Garcia showed A♣ J♦, while Luciano held Q♥ Q♠ for the American pro to be ahead.

The flop showed J♣ 3♣ 2♣ to give Garcia a pair of jacks as well as a club flush draw, but the 9♠ on the turn and K♦ on the river could not improve his hand, so meaning his adventure in Paradise was over.

Other players still hoping to gather the big prize include the last woman in the competition, Xuan Liu (in 15th place on 1,082,000), and Dutchman Ruben Visser (20th on 461,000), although both will have a lot of work to do today to be in with a realistic chance of victory.

Still, all 24 starters today will be striving to pocket that $2 million come the end of the main event.