Day 2 of the $10,000 buy-in main event at the PokerStars Caribbean Adventure (PCA) was all about Faraz Jaka as the American pro dominated to take a commanding chip lead over his nearest rivals 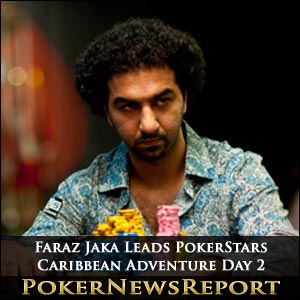 Day 2 of the $10,000 buy-in main event at the PokerStars Caribbean Adventure (PCA) was all about Faraz Jaka as the American pro dominated to take a commanding chip lead over his nearest rivals.

The starting field of 1,072 – compiled from the 418 players who entered Day 1a and the 654 registered for Day 1b – had been cut sown to 544 survivors heading into Day 2 at Paradise Island’s Atlantis Resort and Casino.

However, at the end of another six levels – which took us to 15 in total – just 183 players remain in contention for the $2 million top prize, with one-time World Poker Tour (WPT) Player of the Year Jaka leading the way.

Los Angeles-based Chino Rheem, with around 300,000 in chips, joined Jaka’s table not long after the chip leader had taken over at the top and was unfortunate to be seated to the dominant American’s left.

Essentially, the one-time WPT champion could not have found himself in a worse position in this event – and in under two hours had lost the majority of his chips to Jaka.

Jaka eventually popped 100,000 into the pot on the river, only for Rheem to make the call. However, the latter couldn’t best the A♥ K♣ of Jaka and was eliminated soon after.

Jaka completed Rheem’s demise when the latter, who was under the gun, placed his remaining 15,000 chips in while holding A♣ 9♣.

Now in the big blind, Jaka called with A♥ J♥ to be in a dominant position and ultimately completed his job on Rheem on a board of A♠ J♠ 2♠ K♣ Q♣.

However, Jaka was in no mood to slow down and increased his huge stack by another 50,000 in the very next hand when his sent another opponent to the rail.

While he did lose some chips in the sixth and final level of the day, Jaka is still way ahead of the chasing pack.

Drinan, of Illinois, had started the day with a healthy stack of 142,700 sit in fourth place, but quickly saw that chopped back to approximately 50,000.

However, a double elimination – which saw Triple Crown winner Bertrand ‘ElkY’ Grospellier, of France, and Alabama’s Hoyt Corkins hit the rail – took Drinan back into contention so that he ended the day as he had started, in fourth spot on the leaderboard.

The 9♠ arrived on the river and once again Drinan checked to induce an all-in bet from Corkins.

Drinan quickly called to table Q♣ Q♠, beating the aces of Corkins and Grospellier’s starting hand to rocket up the leaderboard, where he remained for the rest of Day 2.

No less than 160 players will make the money, so expect the bubble to burst fairly early today.