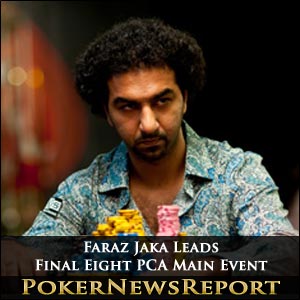 Never mind The Fantastic Four, we’ve got The Astonishing Eight to provide some incredible action after the final table of the $10,000 buy-in main event at the PokerStars Caribbean Adventure (PCA) was reached following five days’ play.

As with all great superhero teams, there has to be a leader – and the top man heading in to Day 6 of the main event is, as it should be, an American in Faraz Jaka.

He, like all the other players to make the last eight, showed great stamina, mental toughness and no little humour to make it through the near 13-hour day to emerge as a member of such an elite team.

OK, Jaka might not be Captain America, but graphic novel fans will surely approve of a States star leading this awesome octet – and will undoubtedly produce a rapturous round of applause to discover a female as part of the line-up.

Canadian Xuan Liu, who will start today in Seat 7, is not just the only woman to make the last eight, but she is the very first female to make an appearance in this particular event’s final table history. It just seems right that we have her to mix it up at Paradise Island’s Atlantis Resort and Casino.

With the tournament now in its 30th level, and the blinds at 60,000 and 120,000, along with a 10,000 ante, we should be guaranteed a wonderful final day’s action as players such as States star Anthony Gregg aims to improve on his second place finish from 2009.

The Maryland pro picked up $1.7 million for that runner-up spot – after losing his heads-up battle to Canadian Poorya Nazari – but will be eyeing up the $2 million first prize this time.

But Gregg – in Seat 2 – has a lot of work to do with just under 10 big blinds in his chip stack of 1,160,000 if he is to better that finish from three years ago as he enters the final table as the short stack.

American John Dibella, who will take Seat 6 in the Imperial Ballroom, isn’t too far back in fifth place on 3,465,000, so will be right in contention from the off.

The first player to crash out on Day 5 was Australian Danny Chevalier. Starting as the short stack, he fell when his A♣ 10♠ came up against the K♥ K♣ of Miami’s Daniel Shiff.

It was pretty well all over for Chevalier when a third king arrived on the flop – and he couldn’t improve as the last Aussie alive in the tournament exited in 24th for $52,000.

American duo Alex Venovski and David Peters – both for $52,000 – were eliminated soon after, only for the remaining 21 players to then dig in for a long time before another disappointed pro was sent to the rail.

However, Florida’s Corey Burbick did eventually succumb to exit in 21st place – also for $52,000 – after his sevens lost out to the A-Q of Canadian David Bernstein.

Next out were Ohio’s Byron Kaverman after his sixes were met with aces, and fellow American Daniel Schmieding – again for $52,000 – to leave us with two tables.

By this point, ex-Team PokerStars Pro Visser – whose biggest cash win, $228,247, came back in April of 2010 with a runner-up spot in the €5,000 No-Limit Hold’em event at the European Poker Tour (EPT) Grand Final in Monte Carlo – had crept into a tight chip lead.

Visser will certainly be motivated because, if he can survive one elimination today, the Amsterdam native will be assured of his biggest ever pay day with at least $260,000 coming his way for seventh place.

David Granados Out in 16th Place

Sixteenth place and $58,000 went to Mexican David Granados after he lost a coin flip to Gregg, who finally had a reasonably sized chip stack to play with following quite some time down among the low stacks.

Day 4 chip leader Jaka, meanwhile, had dropped somewhat when his A-K ran into aces, although he did snatch some of those chips back when eliminating Toronto’s Sam Greenwood in 15th place for $58,000.

Seattle’s Alex ‘Assassinato’ Fitzgerald left in 14th for $70,000 when Liu took over as chip leader by eliminating the American following his four-bet all-in for approximately 2.1 million.

Fitzgerald showed K♠ 10♠ after Liu – with the larger stack – had made the call with the dominant A♣ Q♦.

Liu Takes Over as Chip Leader

Two aces arrived on the flop to leave Fitzgerald beaten and Liu the chip leader on about 4,500,000 as the 13 survivors took a dinner break.

When that baker’s dozen returned, however, the gathered railbirds were treated to some thrilling play as the players seemed determined to speed the game up.

Nikolaos Alafogiannis, of Canada, had been all-in on numerous occasions throughout Day 5, even managing to double-up occasionally, but came unstuck when his 8♠ 7♠ couldn’t better the K♠ Q♦ of London-based Swede Martin Jacobson.

All the while, Julius, of Illinois, and Visser had been challenging to see who could break through the five million barrier first, with the former winning that particular race.

Kyle Julius Moves Atop the Leaderboard

Not that he held that distinction for long as Liu quickly topped the six million mark, only for the American to return to the head of the leaderboard soon after.

D’Auteuil’s chip stack was heavily damaged after that hand and he was quickly gone when Jaka – who had been fairly quiet for some time – scooped up the remainder to zoom back into a challenging position in what was the largest pot of the main event.

D’Auteuil decided to move all-in with J♣ 6♣ just after a break, while Gregg attempted to isolate him by re-shoving with his K♦ 10♦.

However, neither player could have expected big blind Jaka to find A♦ A♣, resulting in D’Auteuil’s elimination and Jaka’s climb up the leaderboard from his collecting of 5,500,000 chips.

The bigger stacks were in control now and persistent European Poker Tour (EPT) final table player Jacobson only just missed making yet another last day after his J♠ 10♥ was beaten by the A♦ K♥ of Liu.

With the Swede eliminated in 10th place for $101,000, the unofficial nine-player final table was set.

New York State’s Lee Goldman must have felt confident when going all-in for his last 1,025,000 chips for nine big blinds while holding K♠ K♣, but he ended up as the last player to exit on Day 5 of the main event.

Goldman’s confidence of doubling up must have soared when he saw the 9♠ 9♦ held by original raiser and eventual caller Dibella, of Arizona. Visser had asked for a chip count, before deciding to fold.

Dibella was not happy, of course, and remained disgruntled when the flop showed 3♠ 6♦ 4♠ to leave him as a massive underdog with his smaller pair.

The J♦ on the turn changed nothing, but then the river showed the 9♥ and Goldman was gone in ninth place for $101,000 as the day finally came to a close and the chips were bagged up to loud shouts of approval from Dibella’s fans.