The American Gaming Association has announced that president and CEO Frank Fahrenkopf will be stepping down from his position in the middle of this year. 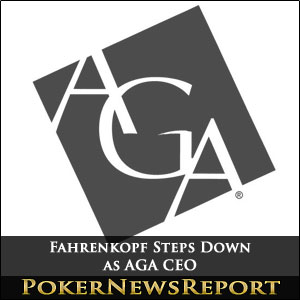 The American Gaming Association has announced that president and CEO Frank Fahrenkopf will be stepping down from his position in the middle of this year.

Fahrenkopf has led the AGA since its inception in 1995, but will resign from his duties effective June 30, 2013. He will, however, act as a consultant during a transition period following his departure after an executive search firm locates a successor.

In a press release announcing his resignation, Fahrenkopf said that he has enjoyed my time at the helm of this incredible organization and am proud to have represented an industry that provides tens of millions of men and women with the best entertainment value in the world.

Prior to leading the AGA, Fahrenkopf served as chairman of the Republication National Committee. He held that post for six of the eight years that President Ronald Reagan was in office, including the election years of 1984 and 1988. He currently acts as co-chairman of the Commission on Presidential Debates.

The AGA has been an influential lobbying organization on behalf of casinos. In addition, under Fahrenkopf’s direction, the organization has been behind responsible gaming strategies and has successfully promoted industry trade shows such as G2E Asia and the Global Gaming Expo.

There’s no doubt that Frank’s political savvy has been instrumental in protecting and promoting our industry’s interests on Capitol Hill, but the impact of his leadership stretches well beyond Washington, said chairman and CEO of MGM Resorts International Jim Murren. From the very start, he understood the need to unify the industry in addressing key issues like responsible gaming and diversity, programs that are at the cornerstone of how we do business. Frank’s legacy at the AGA is testament to what we can accomplish together.

The AGA supported the Reid-Kyl federal bill, which strengthens laws against online gambling while permitting a carve-out for online poker. The bill was never introduced in Congress prior to the end of 2012, but Sen. Harry Reid is expected to push for passage of the bill this year.

I would like to acknowledge the AGA board members who have provided the support we needed to succeed, Fahrenkopf said. I look forward to continuing to work with this talented group in the coming months as we transition to this new era for the AGA.