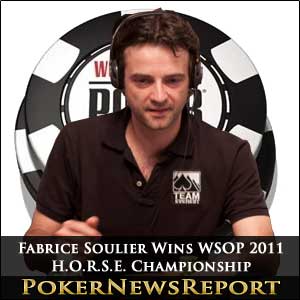 Soulier had been considered one of the best poker pros to have never won a WSOP title prior to his success, but thoroughly served to shed that dubious moniker in the Rio, having most certainly paid his dues over the past 12 years.

The 42-year-old – who made his WSOP debut back in 2000 – had experienced more than his fair share of disappointments, but that will all be forgotten now that he has finally broken his duck by outlasting 239 other entries.

Maybe it was Soulier’s decision to take up yoga that allowed him to succeed as he admitted that meditation “cooled” him down when before he found it very difficult to control his emotions – particularly when getting deep into tournaments at the WSOP.

Buchanan – still without a bracelet despite several near things – and Soulier returned to the Amazon Room for an unscheduled fourth day, but it was the Frenchman who emerged victorious when his two-pair beat out the Canadian at the end of a marathon match-up during an Omaha High-Low Split round.

Now living in Vegas, Soulier – who had previously stayed in Paris – followed in the footsteps of Elie Payan and Bertrand ‘ElkY’ Grospellier with success for France.

Certainly, Soulier’s victory was “very emotional” as he confessed that he had “almost cried” when the final hand was played out, before adding that he “had to hold back my tears”.

Formerly a television and movie director, Soulier decided to give poker a serious go 12 years ago – and was pleasantly surprised to discover that he had a flair for the game as he enjoyed great success in Europe to now sit on almost $4 million in live tournament earnings.

But he also believes that the hat-trick of titles won by his countryman this year – the nation’s best ever showing – could mark “the start of France becoming a big nation for poker (as) we have a lot of good players now, and more and more are coming”.

However, Soulier has been flying the flag for France at the WSOP for eight successive years – with cash finishes at every series – and now possesses a record of one win, six final-table appearances, and 18 cash finishes for $1,129,258 in WSOP winnings.

Again, no previous bracelet winners made the eight-strong final table – for a 10th time at this WSOP – with Italian Max Pescatori the last to go out in ninth for $48,436.

However, among the 24 cash winners were five other former WSOP title winners – and they were Daniel Alaei (24th), Robert Williamson III (22nd), Frankie Odell (17th), and Ram Vaswani (12th), although the most impressive is Vietnamese pro Chau Giang, who now has 58 career cashes, including three titles, following his 15th place finish at this event to put him tied in seventh place on the all-time rankings.

But that doesn’t mean the table was lacking in quality as the likes of Jacobo Fernandez, Michael Binger, Matthew Ashton – for his first WSOP cash – Tom Dwan, Daniel Ospina and Andrey Zaichenko fought it out for the gold bracelet.

Meanwhile, British Columbia’s Buchanan has now recorded 22 cash finishes at the WSOP – including eight last year – to have accumulated more than $1.5 million at the series. Of course, he’d rather have secured his first victory, but $376,458 for his runner-up spot is a nice consolation.