French poker player Fabrice Soulier and Hong Kong star David Steicke lead after Day 2 of the Epic Poker League Main Event at the Palms Hotel & Casino in Las Vegas. Soulier, who won the World Series of Poker HORSE Championship on his last visit to Vegas, and Steicke – with a series of recent cashes in the Asia Pacific Poker Tour – enjoyed practically identical days as they climbed from mid-table obscurity to lead the 23 players that remain in the EPL Main Event. 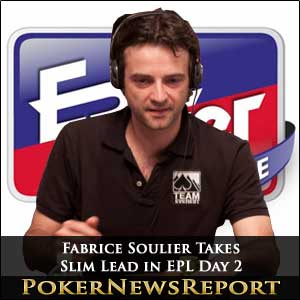 Soulier, who won the World Series of Poker HORSE Championship on his last visit to Vegas, and Steicke – with a series of recent cashes in the Asia Pacific Poker Tour – enjoyed practically identical days as they climbed from mid-table obscurity to lead the 23 players that remain in the EPL Main Event.

At the start of Day 2, fifty of the 97 players who entered the tournament took their seats to compete for the $782,410 first prize, the champion´s ring and valuable points in the Global Poker Index.

With the blinds at just 500/1,000, not many of the players were in trouble on the eight-handed tables, but the eliminations happened thick and fast throughout the first two levels.

What Were They Thinking?

Among those who failed to stay in their seats for more than an hour were Scott Clements (A♥ 9♠), who shoved all-in on a flop of 8♥ 7♣ 6♥ against Mike Matusow (6♠ 6♣). The 8♠ on the turn confirmed Clements´ exit and the K♥ on the river was irrelevant.

Soon after David Baker moved all-in pre-flop with A♦ Q♦ (acknowledged as the most expensive opening hand in poker) against Amit Makhija´s Q♥ Q♠ and the lack of an Ace sent “ODB” to the rail.

Within the first hour we had also lost Ben Lamb who got all his chips in pre-flop with 8♣ 8♦ against Michael Binger´s A♠ 8♥, and with Queens and Jacks hitting the board Binger´s superior kicker won the hand, and Steve Brecher – who’s A♦ K♣ failed to catch and was eliminated by Tommy Vedes´ 3♣ 3♥.

Anything You Can Do, I Can Do Better

Fabrice Soulier was the first to win a major pot, as he eliminated Pro/Am event winner Greg Mueller, when the Frenchman´s 9♣ 9♥ held up against Mueller´s J♥ Q♥ – Soulier now up to 195,000 chips.

And So It Continued …

Soulier got ahead of Steicke again within a few hands – sending Mike Sowers to the rail with 7♥ 7♠ against Sowers´ A♣ J♠. Soulier up to 263,000 chips.

Both players also suffered temporary setbacks at the same time – Fabrice Soulier losing a pot to Matt Glantz´s rivered straight and David Steicke having his pocket Aces cracked by Christian Harder´s trip Jacks, but it was soon back to normal for both players – Soulier eliminating James Mackey with 9♠ 9♥ v A♣ J♣ and Andrew Robl with K♦ 6♦ v Q♦ 10♦, while Steicke crushed yesterday´s “Aces Man” – Dan O´Brien – with a set of threes against O´Brien´s two pair Aces and Kings.

Players continued to be toppled throughout the day.Phil Hellmuth, who had forecast that his third in the Pro/Am and second in the Charity Tournament were the stepping stones to a first place in the Main Event was busted by Allen Bari when his Jacks ran into Bari´s Kings, and Tom Dwan (10♥ 10♦) got himself all-in on a flop of J♦ 8♥ 7♥ against Dutch Boyd´s J♠ 7♠ – the two pairs holding on.

Overnight chip leader from Day 1, Jaime Kaplan, improved his position in the game late in the day by busting out Mike McDonald, and tonight – when the players play down to a final table of eight – the twenty three players left in the Main Event will include Main Event Nº 1 victor, Chino Rheem, who will be hoping that the EPL Standards and Conduct Committee let him keep some of his money this time!.