Fabrice Soulier put a disappointing sequence of live tournament results behind him when winning the record-breaking EPT Vienna High Rollers Event for €392,900. 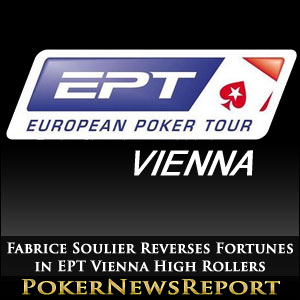 Fabrice Soulier put a disappointing sequence of live tournament results behind him when winning the record-breaking EPT Vienna High Rollers Event for €392,900.

Fabrice Soulier has not enjoyed the greatest sequence of live poker results recently by his high standards – having amassed just three minor cashes on his Hendon Mob database since coming second to Adrian Mateos Diaz in the €1 million WSOPE Main Event last October. However, this weekend at the Hofburg Palace in Vienna, Soulier´s luck returned – enabling him to take down the PokerStars-sponsored EPT Vienna High Rollers Event.

181 players had ponied up the €10,300 buy-in for the event – the largest field ever assembled for an EPT High Rollers tournament – and created a prize pool of €1,773,800 which was shared between the top 27 players. By Saturday morning, only nine players remained, with Russia´s Dmitry Yurasov holding a narrow three big blind advantage over Germany´s Benny Spindler:

With three players having less than 20 big blinds when the climax to the EPT Vienna High Rollers got underway, it was no surprise that there was a lot of early action. What was surprising was that it was Jonathan Duhamel who was the first to bust from the event – running his 9♥ 9♦ into Dmitry Yurasov´s 10♣ 10♥ and seeing the 10♦ fall on the flop.

Fady Kamar was the next player to leave the final table – losing the last of his chips with A♣ J♠ in a three-way pot against Yurasov (A♠ K♠) and Vitaly Lunkin (Q♥ Q♣) in which Lunkin made a King-high straight, and – incredibly – Kamar was quickly joined at the rail by Benny Spindler, who moved all-in with A♠ Q♣ and failed to improve past Vitaly Lunkin´s A♠ K♠.

More Surprises as Agerskov, Yurasov and Lunkin are Eliminated

Rasmus Agerskov had lead a charmed life at the final table – doubling up twice against Dmitry Yurasov – before trying once again with Q♦ 10♥ and failing to connect with the board against the Russian’s A♣ 5♠. However, Yurasov’s enhanced chip stack was soon crippled by Fabrice Soulier 7♦ 5♦ (turned straight) > Q♦ 9♠, and Yurasov was the next player to depart the final table when his Q♦ 10♠ missed its open-ended straight draw and was bested by Anatoly Filatov´s 6♠ 6♥.

Vitaly Lunkin´s departure came after he was crippled by Fabrice Soulier K♥ 9♥ > K♣ Q♥ – in a hand in which Soulier had flopped two pairs that had improved to a Full House on the River – and then doubled up K♦ 5♠ > J♦ 10♣ against Anatoly Filatov when flopping trip Fives. Filatov took his revenge in the next hand – calling Lunkin´s A♥ 8♥ shove with A♠ 7♠ and flopping a pair of Sevens to send Lunkin to the rail in fourth place.

Filatov Busts Okhotskyi in Third – but Soulier Leads into Heads-Up

Oleh Okhotskyi was another player who had led a charmed life throughout the final table – always finding double-ups when his tournament life was at risk – but his luck could not hold out any longer, and he was bust in third place when his A♠ 5♠ failed to improve past Anatoly Filatov´s A♦ 7♥. However, despite eliminating three players in a row, Anatoly Filatov was still at a 3.275 million chips -v- 5.775 million chips disadvantage against Fabrice Soulier when the heads-up got underway.

The two chip stacks drew level when Anatoly Filatov made a Full House with 7♦ 6♦, but Fabrice Soulier once again moved into the chip lead when correctly calling a Filatov bluff K♦ 7♣ > 8♣ 7♦ on a King-high board. Soulier continued to grind down Filatov and – reduced to his last million chips (about 16 big blinds) – called Soulier´s A♠ 5♠ shove with K♠ 10♥.

Although behind when the cards were turned on their backs, the flop of Q♠ 9♣ 2♦ gave Filatov additional outs to a gutshot straight; but he missed them all on the Turn (8♥) and River (7♠), and Fabrice Soulier had won the EPT Vienna High Rollers – his first live poker tournament victory since taking down a side event at the 2012 WSOPE.