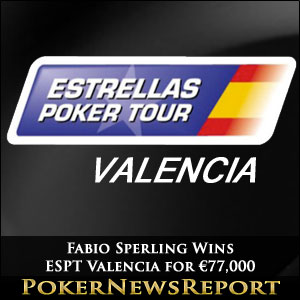 Fabio Sperling produced a stunning performance to win the ESPT Valencia Main Event after starting the eight-handed final table in seventh position with just eighteen big blinds at his disposal. His victory was all the more remarkable as, when play started at the Casino Valencia, the three players with the biggest chip stacks were all seated to his left.

However, throughout the four and a half levels of play it took to conclude the ESPT Valencia Main Event Fabio Sperling found the right cards when he needed them to bust four opponents and take a substantial chip advantage into the heads-up against Day 1B chip leader Jordi Martinez.

Sperling Moves into Lead with Aces and Tens

When the final table got underway the blinds were 15,000/30,000 with a 4,000 chip ante, and the short-stacked Jose Martinez quickly lost his seat to Raul Alonso (J♣ J♠ > 10♥ 7♠) with an ill-timed shove on the first circuit of the button. Fabio Sperling enjoyed a double up against Haritz Doyharzabal before finding pocket Aces to send Benjamin Garcia (pocket Threes) to the rail in seventh place.

Jordi Martinez moved into a temporary chip lead when his pocket Nines formed the middle of a gutshot straight to best Amir Farhangi´s pocket Kings, but Fabio Sperling was soon giving chase – taking a massive pot from Haritz Doyharzabal with a rivered Full House before eliminating the former chip leader 10♥ 10♦ > A♥ 2♥ to head the ESPT Valencia Main Event leaderboard.

Aces and Tens Again involved as Sperling Leads into Heads-Up

Fabio Sperling enjoyed two big slices of luck to eliminated Vincente Serra in fourth place and Raul Alonso in third. Serra had moved all-in with pocket Jacks and Sperling had made the call with A♣ 10♥. Serra was a 70% favourite to double up, but the A♥ in the window was followed by the 10♦ and, with no Jacks appearing on the Turn or River, Serra was out of the ESPT Valencia.

Raul Alonso´s departure was even more unfortunate. He had got his chips into the middle with A♠ 10♠ against Sperling´s K♥ J♠, and was a 77% favourite to win the hand after the flop of A♥ J♥ 6♦. However the Q♦ on the Turn and 10♥ on the River gave Sperling a runner-runner straight to bust Alonso from the event and enable Sperling to take a 6.4 million -v- 1.76 million chip advantage going into the heads-up against Jordi Martinez.

Jordi Martinez raised Spanish supporters hopes of a home victory with a quick double-up A♠ K♠ > A♥ 9♦, and then put Fabio Sperling under pressure by moving all-in three times on the trot and capturing the blinds – which were now 50,000/100,000 (ante 10,000). However, the next time Alonso shoved into his blinds, Sperling called and the cards were on their backs:

Although Aces and Tens were involved in the hand once again, there were no fireworks on the board of 2♣ 9♠ K♣ / 8♠ / 4♥ and Fabio Sperling was the ESPT Valencia champion courtesy of his Queen kicker.