The latest addition to the World Poker Tour started yesterday in the beautiful Mediterranean town of Portomaso, Malta – the first re-buy Main Event to be included in the WPT schedule. 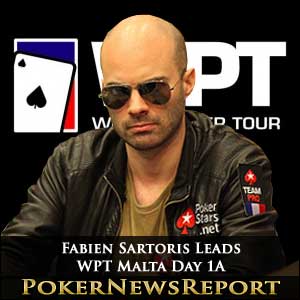 The latest addition to the World Poker Tour started yesterday in the beautiful Mediterranean town of Portomaso, Malta – the first re-buy Main Event to be included in the WPT schedule.

A Good Day for Dan Carter

One of the younger stars of UK poker, Dan Carter, performed well on Day 1A of the event. Dan, who has a stack of GUKPT final table appearances among his live poker results, took the chip lead shortly after the dinner break and eliminated Byron Kaverman at the same time. With 7,000 chips on the table and a flop of 10♦ 5♠ 2♠, Dan, Kaverman and a third player in the hand checked round. The 9♣ on the turn prompted a bet of 4,200 from Dan which was called by Kaverman and the third player got out of the way. Dan checked the 8♥ on the river, but Kaverman pushed all of his chips into the centre of the table. Dan waited for a while before making the call and reveal 8♣ 7♣ for third pair. Kaverman turned over A♦ J♦ for nothing, and was out of the tournament.

Not So Loose Please Mr Hellmuth

One of the notable players who will be looking to re-enter the event tomorrow is Phil Hellmuth. In an extraordinary sequence of events, Hellmuth – who has a reputation for turning up late for tournaments – rolled in at the end of level 5, bluffed an opponent with K7, and busted out to the other player´s top pair top kicker. Other players sent to the rail under more conventional circumstances included Arnaud Mattern, Fabrice Soulier, John Eames, Justin Bonomo, McLean Karr and Byron Kaverman.

Several angry altercations occurred during the day in Portomaso Casino. The first happened when Fabrice Soulier moved all-in with A♠ K♠ to be called (and eliminated) by Andreas Klatt holding K♥ K♦. Soulier believed he was slow-called and made his feelings apparent to everybody as he left the poker room. Verbals were also exchanged between McLean Karr and Ilah Boujenah after Justin Bonomo revealed that Boujenah had been tweeting how badly Karr had been playing. Karr had to be quietened by his girlfriend, Tatjan Pasalic, and left the room for almost an hour to cool down. When he returned, Karr lasted only a few hands before busting out to Alessandro Borsa – both players catching trip sevens, but Borsa having an A♣ kicker.

WPT Mala Chip Counts at Close of Day 1A

Dan Carter was not the only UK poker player to enjoy a good day, as David Vamplew – warming up for an attempt to retain his EPT London crown – finished with mid-table respectability and 39,875 chips. Hopefully the two players will enjoy a pleasant day off from the action as the Day 1B gets under way at the Portomaso Casino.