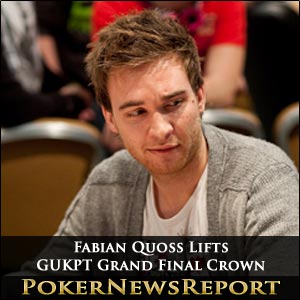 Cody had become the youngest Triple Crown winner after taking down event #2 – a $25,000 No-Limit Heads-Up tournament – at this summer’s World Series of Poker (WSOP) for $851,192, adding this title to his European Poker Tour (EPT) Deauville and World Poker Tour (WPT) London successes.

The 23-year-old had also come close to picking up a World Series of Poker Europe (WSOPE) bracelet, but ended up in seventh for $150,000 at the $10,400 main event at Le Croisette Casino Barrière in Cannes back in October.

However, he was unable to hold off the challenge of Nuremberg’s Quoss in London – even though his was chip leader for most of the final day.

Quoss has enjoyed some great results recently, adding this GUKPT title to the $130,380 he picked up in August when winning the German Championship of Poker (GCOP) €1,600 No-Limit Hold’em main event.

Third place went to Lalit Khajuria, who produced a battling display to remain in contention despite being the short stack for much of three-handed play to leave with £59,700.

With just the above three remaining, Cody soon found himself a big chip leader on 2.9 million after hitting Quoss hard to chop the German back down to 1.6 million. London-based Khajuria, meanwhile, had become the short stack on 350,000.

Khajuria, however, fought back impressively to eventually double-up through Rochdale’s Cody to 1.6 million about 15 minutes into level 22 when he called his opponent’s all-in raise. Khajuria held jacks to Cody’s tens and remained in front to cut the latter’s stack back to a little over two million.

But, just as it seemed that Khajuria was on the rise, he was quickly hit hard in yet another hand with Cody that left the former sitting on about 650,000.

Khajuria checked the K♥ turn and Cody bet 200,000, to be called once more by his opponent.

Khajuria rapped the table to check in the dark as the 5s arrived on the river. However, Cody bet 300,000 and was swiftly called by Khajuria.

Cody showed Q♥ 9♥ for trip queens and Khajuria mucked his hand, which he stated was A-K, although we’ll never know.

But then Cody called Khajuria’s all-in pre-flop to show K-Q against K♠ 8♠. Cody was looking good to make it heads-up against Quoss, only for an eight to be the first card on the flop as Khajuria doubled-up to 1.2 million.

With Quoss taking numerous chips from both his opponents, Khajuria made a stand while holding Q-J. However, he was unfortunate to find Quoss holding pocket queens and Khajuria did not find any cards to help him and left the tournament in third place.

Quoss revealed A-Q, while Cody held K-J to be a massive underdog – and so it panned out as two aces appeared on the flop to give the former trip queens. The turn changed nothing and the king on the river was not enough to help Cody, so giving Quoss the glory.

Jonas Ovestad was the first elimination on Day 3 in ninth as he moved all-in pre-flop with A-Q, to be faced by the pocket tens of Fabian Quoss. The Englishman could not improve his hand and left with £9,750 for his troubles.

Next to go was Nathan Watson in eighth for £13,400. Watson and fellow Englishman Alex Elias saw a board of 2♠ 4♣ 5♣ Q♠ and the former moved all-in with a pair of kings to be met with Elias’s trip queens. The river changed nothing and Watson hit the rail earlier than he hoped.

London’s John Gale left the tournament in seventh for £18,300 after losing out to 2010 Irish Open winner James Mitchell, from Wimbledon.

The 6s on the turn saw Mitchell go all-in and Gale call to show 9♠ 10♠. Mitchell held K-Q, though, for top pair, while Gale held middle pair. The river is the 2♥ and Gale is out.

Sixth place and £23,150 went to yet another London player in Tamer Kamel after he was eliminated by Quoss.

Two other threes arrived on the flop to give Quoss trips, and that is the end of Kamel’s tournament.

Mitchell exited the event in fifth for £28,050 after losing a hand to Cody.

Mitchell then moved all-in with his A-J and received a quick call from Cody, who placed K-Q on the felt to leave his opponent requiring an ace or queen to stay alive.

However, the turn ad river cards were blanks and Mitchell was gone as Cody moved into a strong chip lead on 2.7 million.

Fourth place was taken by Elias, who left the Grosvenor Victoria Casino with £36,550 after losing out to Quoss early in level 21.

Elias went all-in for a second hand in succession, and this time he was called by Quoss, who held eights to dominate the former’s fives.

The flop and turn provided split possibilities after revealing A-A-J-J, but the river gave Elias no help.

Then came that incredible session of three-handed play before Quoss emerged triumphant.

Day 2 had ended with Cody still in command on 1,416,500 chips as the final table was established, although he sat just 500 chips ahead of second placed Quoss.

Jonathan Beck was the final table bubble boy as his A-2 failed to improve enough to beat Cody’s A-10. Beck left with £8,550 for a 10th place finish.

The cash bubble also burst on Day 2 as Marcin Wydrowski hit the rail in 21st place, just missing out on £4,900.

Small blind Gale, called, but Cody then made it 30,000. Shakerchi called that raise, but Gale folded.

A flop of Ah-Kh-7h was dealt and Cody and Shakerchi checked to see a 5 on the turn. Cody put in 35,000 and Shakerchi, without a moment’s thought, quickly called.

A 4 arrived on the river and both once again checked. Cody then reveled A-3 for top pair, while Shakerchi and Wydrowski mucked their hands to send the Pole to the rail.

Sheringham, who was aiming to follow in the footsteps of his former Millwall FC colleague Tony Cascarino in winning a GUKPT Grand Final, moved all-in with A-10 and was joined by Dave Barnes, who revealed A-K.

However, both were packing up their belongings very quickly when Cody, with pocket queens, added three jacks for a full house.

The GUKPT returns in January with the first leg of the 2012 tour stopping in Manchester from the 23rd to 29th. We’ll be there to keep you updated.

Top 10 placings and payouts at the GUKPT Grand Final