Fabian Ortiz twice eliminated players at the final table of the LAPT Panama Main Event with pocket Aces on his way to claiming victory and the $143,930 prize. 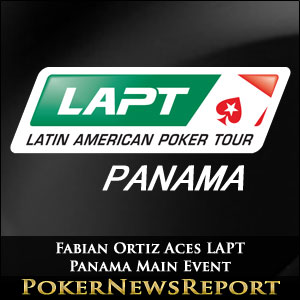 Fabian Ortiz twice eliminated players at the final table of the LAPT Panama Main Event with pocket Aces on his way to claiming victory and the $143,930 prize.

Fabian Ortiz is a master of unlikely comebacks. In 2009, the Argentinean recovered from having half of one big blind to win the LAPT Chile Main Event and, during nine-handed play on Saturday´s Day 2, he was again looking the least likely player to achieve a victory – having the shortest stack which at the time was equivalent to fourteen big blinds.

However, double ups against Guillermo Olvera K♦ K♥ > A♥ J♠ and Nick Russo Q♠ J♦ > K♠ Q♣ enabled Ortiz to remain in contention, and he eventually took the chip lead to Sunday´s final table when eliminating compatriot Arial Scaparro in ninth place 8♥ 8♣ > A♠ 10♥.

Rios in a Hurry to Lead – Lemaire the First to Leave

Javier Rios took the chip lead in the first hand of the LAPT Panama Final Table, when his 7♣ 5♣ Turned two pairs to take a 1 million chip pot from Ortiz; and he then extended his lead with K♣ K♦ in the second hand against Alexander Haber, and was over 3,500,000 chips when his A♠ 9♠ bested Hugo Suarez´ pocket Tens in the third hand.

Rios was also involved in the hand which saw the first elimination – calling Antonio Hogaza´s A♦ 10♥ shove with his own K♥ Q♠ after Hugo Lemaire had pushed the last of his chips into the middle with 8♣ 8♠. Hogaza´s Ace paired on the flop to practically triple him up, while Lemaire was eliminated when Rios paired his King on the River.

Ortiz Back in Control after Five Fast Exits

Within the next fifteen hands five players were to depart in quick succession – including Javier Rios. The sequence started with Fabian Ortiz eliminating Antonio Hogaza A♥ A♠ > A♣ K♠ after Rios folded with more than half a million chips committed to the pot. Rios then doubled up Guillermo Olvera A♣ K♦ > A♦ 7♥ before losing the last of his chips to Olvera 8♠ 8♦ > 8♣ 6♣ following the flop of 9♥ 10♦ J♦.

Hugo Suarez (A♥ Q♣) was unfortunate to be bust in fifth place by Fabian Ortiz (A♣ 8♣) when the 8♥ landed on the Turn, but there was no element of luck about how Ortiz eliminated Nick Russo in fourth place – A♥ A♣ > K♦ 2♣ – Ortiz finding pocket Aces for the second time in twelve hands. Three hands later and the heads-up was set – Ortiz responsible for his fourth final table elimination when Alexander Haber moved all-in with A♥ 7♠ and ran straight into Ortiz´ A♣ J♥.

Guillermo Olvera´s advantage lasted just a couple of hands – Fabian Ortiz rivering a Queen-high flush in a 1.9 million chip pot to move back into the lead, and soon after it was all over. Olvera had min-raised from the button to 250,000 chips, and Ortiz announced he was all-in. Olvera made the call and the cards were on their backs:

The flop of 8♥ 7♠ 4♥ made it likely that Olvera would achieve another double up, but the K♥ on the Turn left him needing an Ace to stay alive in the tournament. Unfortunately for the Mexican, the J♥ blanked on the River, and Fabian Ortiz had won the LAPT Panama Main Event for $143,930 – courtesy of pocket Aces at the most convenient times!