Australian poker star Joe Hachem has quickly moved to establish a new relationship that will keep him “closer to home” after quitting as a Team PokerStars Pro just last month. 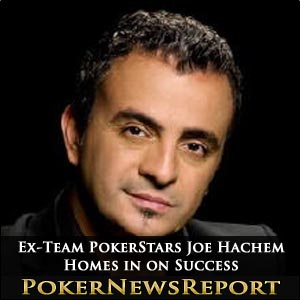 Australian poker star Joe Hachem has quickly moved to establish a new relationship that will keep him “closer to home” after quitting as a Team PokerStars Pro just last month.

The 45-year-old – who took down the 2005 World Series of Poker (WSOP) main event for a then-record $7.5 million – called a press conference during the Aussie Millions in Melbourne to announce his decision to “partner with a consortium comprising the AsianLogic Group and some of their contemporaries”.

It appears Hachem, who brought numerous journalists together in the Crown Casino, has decided to remain closer to his family after many years of globe-trotting following his WSOP bracelet success – and that is where online casino operator AsianLogic come in, even though the poker star did not reveal his exact role within the company.

The 13-time WSOP cash finisher said: “After many years working extensively around the world, I made the decision that my next venture would keep me closer to home, would allow me to spend more time with my family and was something that presented me with a wider range of opportunities.

“I am delighted to announce that I have decided to partner with a consortium comprising the AsianLogic Group and some of their contemporaries.

“I will be working with the group in several areas, initially as a new ambassador for the Asian Poker Tour to further the growth of poker and to assist them with several strategic opportunities in Australia and the Asia Pacific Region.”

Established in 2002, AsianLogic enjoys a prominent position in the Asia Pacific’s land-based and online and gambling markets – particularly in the Philippines – and is heavily involved in the development, operation, management and marketing of online casinos, online poker, multiplayer P2P (peer-to-peer) and Asian Games, and online and land-based sportsbetting.

AsianLogic Delighted to Have Hachem

The company, which has more than 450 employees, is certainly forward-thinking and was floated on the London Stock Exchange back in 2007 ahead of their privatisation by management and prominent shareholders in 2009.

AsianLogic non-executive chairman Tom Hall is certainly “delighted to be working with Joe, who is without a doubt one of the most recognisable and respected poker players in the world”.

Hall was also thrilled that Lebanon-born Hachem – who is one of just five poker players to secure a WSOP main event crown and a World Poker Tour (WPT) title – chose the Aussie Millions, “in Joe’s hometown of Melbourne, at this fantastic venue, the Crown Casino, to announce our partnership with Joe”.

The AsianLogic board member is also convinced Hachem’s status in the world of poker will be a massive boost to his company’s development aims, adding: “Joe brings much more to the table than just his poker playing skills.

“His knowledge and understanding of the gaming industry, both domestically and internationally, will be invaluable to us going forwards.

“The Asian Poker Tour is already widely recognised as Asia’s only independent tour and we feel Joe will be able to help us expand this business.”

Hall also stressed that Hachem – who recently finished third in his own AUD$1,150 buy-in Joe Hachem & Shane Warne Charity Event in Melbourne – will be an invaluable addition to their team as they venture deeper into the Anzac area of the world.

He added: “AsianLogic and its partners are also involved in a number of poker and gaming projects and Joe is helping us with some of these, particularly those in Australia and New Zealand.”

Hachem, of course, is delighted to have reached an agreement with AsianLogic and said: “The group are already very successful gaming operators and have a carefully thought out strategy for poker and my role within this will be announced publicly later this quarter.”

Additionally, Hachem – who secured a 27th place finish in the Aussie Millions’ AUD$1,000 buy-in No-Limit Hold’em six-handed event last week – was at pains to emphasise that he “considered offers from several other brands”, but ultimately considered teaming up with AsianLogic to be the “best fit” for him because he will take on “an active role” while also ensuring that he is heavily involved “as businesses evolve”.

The first Aussie WSOP main event winner continued by saying that, while the “Asia Pacific poker market is still in its infancy”, he believes that it possesses “huge potential for growth relatively to the European more mature markets”.

A smiling Hachem finished off his press conference by returning to one of the major reasons for his signing with AsianLogic – the urge to stay nearer to his home. He said: “Working with a partner in the same time zone makes life a lot easier and, while I am still going to be traveling to the major poker tournaments, being able to spend more time at home is fantastic.”

Poker News Report will keep you informed of any developments regarding Hachem’s official position with AsianLogic, so don’t forget to bookmark us for ease of return.