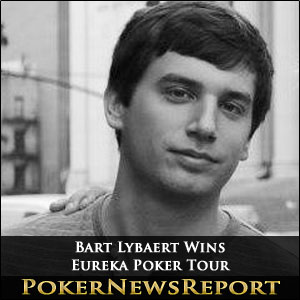 The 21-year-old – who recorded his first ever live cash in the recent UKIPT London Main Event – played an exceptionally tight game throughout the climax to the Eureka Czech Republic Main Event after starting the day second in chips.

As the players took their final table seats at the Kings Casino in Rozvadov, 24 minutes of Level 23 remained (blinds 10,000/20,000 – ante 3.000) with only German player Dirk Recknagel seriously at risk and the five top players closely stacked.

Dirk Recknagel´s path to the final table was one of the major stories of the Eureka Czech Republic Main Event – having recovered from being 30th of the 30 remaining players during the penultimate day of the tournament, with just five BBs, before winning a remarkable series of flips. However, his good run was the first to end.

After an hour of play, Ronald Szczerba (A♣ 5♠) shoved his pile of chips into the middle and was called by Recknagel (K♦ J♥). The board could not have been better for Szczerba, as it ran 3♣ 5♥ 2♥ / A♦ / 5♦, and Recknagel was eliminated in eighth. Soon after, Kasparas Klezys (J♥ 8♦) took the chip lead after flopping a straight against Thomas Erler (9♦ 9♠) and, when Klezys knocked out Szczerba at the beginning of Level 25 (Q♥ Q♠ > A♥ 9♥), he became the first player to go beyond the 2 million chip mark.

Two hands in Level 25 saw Bart Lybaert take control of the Eureka Czech Republic Main Event – first rivering a straight to best Kasparas Klezys´ turned set of Queens, and then forcing Fabian Leib to lay his hand down when raising the stakes with K♥ K♣ on a Q♠-high board.

Giovanni Mazza temporarily became a force in the tournament after his King high Flush eliminated Thomas Erler in sixth, and the Italian was then responsible for busting Kasparas Klezys in fifth (A♠ 5♠ > A♣ 3♣) when both players hit two pair.

Leib Doubles Three Times to be Main Challenge to Lybaert

With such a major chip advantage, Bart Lybaert was able to cover any move made by Fabian Leib, but Leib was choosing his spots carefully and was twice able to double up with Q♥ J♣ > 4♦ 2♣ and 9♥ 9♣ > 4♣} 4♦. His eventual demise came in unfortunate circumstances – shoving with A♥ 10♦ and being called by Lybaert who had been dealt A♠ 3♠.

Leib looked like doubling up again and becoming a threat to Lybaert´s chip supremacy after the flop of A♣ 2♥ 9♣ and turn card 7♣, but the 3♥ on the river gave Lybaert two pairs and the Eureka Czech Republic Main Event victory.

431 players paid the €1,000 buy-in or qualified online for the Eureka Czech Republic Main Event which had a guaranteed prize pool of €500,000. The top 48 players cashed in the event, with the final table payouts as follow:-