Everybody is in the Money at LPS Millions II

The final Day 1 of the LPS Millions II came to a close this morning and, after fourteen opening flights, the surviving 103 players are now in the money. 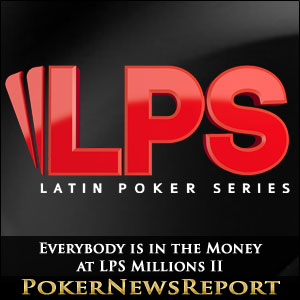 The final Day 1 of the LPS Millions II came to a close this morning and, after fourteen opening flights, the surviving 103 players are now in the money.

The $850 buy-in Latin Poker Series Millions is a unique event – with eleven Day 1s having been played across seven locations in South America and Latin America since late July, and three more Day 1s being completed over the past three days at the Majestic Casino in Panama City.

It was inevitable that the overall tournament leader would emerge from the final opening flight (Day 1N) due to the number of chips that were flying around. Day 1N represented the last opportunity to qualify for Day 2 and get into the money, and some players took the opportunity to re-enter to the limit – Alex Manzano firing a total of 15 bullets over the course of the three Panama flights.

Once the eighteen levels of play had reduced the final day´s field from 250 entries to thirty players, Venezuelan player Anthuan Hazkoun tops the leaderboard with 431,000 chips. How he managed to collate such as massive chip stack went unrecorded in the mayhem that was going on around him, but we guess he picked up most of the chips during the last few levels of play because he had flown under the radar throughout the previous 16 levels.

Had it not been for the crazy number of re-entries on Day 1N – and a little bit of bad fortune – overnight chip leader going into Day 2 of the LPS Millions II would have been Carlos Hernandez. Hernandez finished Day 1L of the tournament with 334,000 chips despite doubling up Jonathan Arturo in the last level of Sunday´s action A♠ 4♠ > A♦ Q♣ – enabling Arturo to also finish among the chip leaders with 207,500 chips.

Day 1M of the event saw a familiar name emerge on the tournament leaderboard- Team PokerStars Pro Nacho Barbero. Barbero finished fifth in this event last year, and was out of the traps quickly on Day 1M – rivering a flush to bust Guillermo Olvera 8♣ 9♣ > 10♦ 3♦ on his way to developing a big chip stack by the dinner break. Barbero doubled his stack against during the closing action to finish Day 1M with the biggest chip stack of the day – 258,500 chips.

No Repeat Victory for Carter Gill

There will be no repeat victory for the winner of the inaugural LPS Millions Carter Gill. Gill fired five bullets to try and retain his title, but fell just short of qualifying for Day 2 on four separate occasions. Last night he was just three places away from cashing in the event when moving all-in with Ace-Jack. Unfortunately for Gill, an opponent called his shove with Ace-Queen and the better pre-flop hand won the pot.

Looking Ahead to Day 2 of the LSP Millions II

When Day 2 of the LSP Millions II gets underway at the Majestic Casino in Panama, the blinds will be reset to 500/1,000 (ante 100). This should give some breathing space to those who crept into Day 2 with relatively small stacks – for example Ezio Fenocchio´s chip stack of 31,000 chips was worth just 6 Big Blinds at the end of Day 1M, but now is worth 31 Big Blinds.

All the players are assured of a $1,500 min-cash, and those with their sights on leaving the Majestic Casino with substantially more in their pockets include: