In yet another blow to U.S. online poker players, the Everleaf Gaming Network withdrew from the American marketplace, reportedly following a cease and desist order issued by the U.S. Department of Homeland Security. 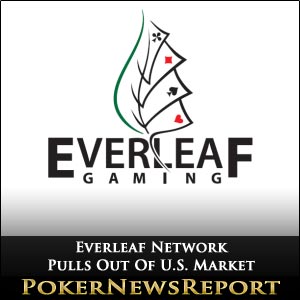 In yet another blow to U.S. online poker players, the Everleaf Gaming Network withdrew from the American marketplace, reportedly following a cease and desist order issued by the U.S. Department of Homeland Security.

A representative of Minted Poker, one of the skins on the Everleaf Network, said that U.S. authorities have seized funds from one of the major payment processors that provided financial transaction services to sites on the network. Under threat of legal action if poker operations continued in the U.S., Everleaf officials consulted their regulatory body, the Lottery and Gaming Authority of Malta (LGA), for advice on how to proceed. The LGA recommended that services to U.S. players should be discontinued, “due to the nature of the threat and the current climate.”

Recent reports indicate that U.S. player funds at the Everleaf poker network are fully protected and poker players with money in their accounts on the network can expect full reimbursement.

Everleaf also instituted a ban on players from France. The network updated its published Terms and Conditions to read, “No person who is resident in Malta, France and USA may open an account, play, or in any other way participate in the ELG offerings and/or services.”

The prohibition of French and U.S. players at Everleaf comes approximately 10 months after the U.S. Department of Justice indicted the top three poker sites of PokerStars, Absolute Poker and Full Tilt Poker in the Black Friday allegations that completely changed the internet poker industry. PokerStars has reimbursed its U.S. players and maintained its ranking as online poker’s top dog in regards to player traffic. Full Tilt and Absolute Poker have yet to reimburse players anywhere in the world.

There are but a few poker rooms remaining that allow Americans to log on and play. Cake Poker, the Merge Gaming Network and Bovada are still U.S. friendly. The recent decision by Everleaf apparently has no bearing on these poker sites.