Known for its payment issues and shady reports, Everleaf Gaming has had its real money gaming license revoked by the LGA. 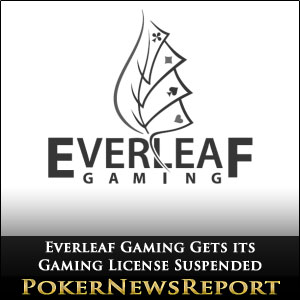 Known for its payment issues and shady reports, Everleaf Gaming has had its real money gaming license revoked by the LGA.

For the past 18 months, Everleaf Gaming has caused numerous headaches for U.S players requesting cashouts. It was then that the smallish network received a cease-and-desist order, forcing it to depart from U.S markets. Since that time, Everleaf repeatedly assured that players would receive their payouts in a timely and efficient matter.

What ultimately happened was that Everleaf provided U.S players with three ludicrous alternative payment options. Two of them entailed opening accounts on sites that didn’t accept customers from the U.S, and the third involved opening a bank account on foreign ground. To date, the company has shown virtually no interest in helping players retrieve what is rightfully there’s. In effect, Everleaf’s stance is that U.S players shouldn’t feel cheated, as they knew the risks going in.

Astoundingly, despite an ongoing investigation, for the past 16 months Everleaf Gaming was still permitted to take on new players and deposits. U.S players were shocked that the Maltese Lotteries and Gaming Authority would still allow such a shady network to remain under Maltese licensure. To make matters worse, international players began experiencing elongated payout delays.

By March of this year, Everleaf has lost whatever remaining credibility it had left when the LGA identified irregularities in the way it conducted business. It was also around that time when the company claimed in a press release that most players had been paid, when in fact, reports showed that a mere 3% of cashouts were handled. But still, it was allowed to accept real money contributions.

Finally, during the 17th month of its investigation, the LGA forced Everleaf to cease all operations. It could no longer register new players, nor could it accept real money deposits or run games.

The LGA’s decision bodes well for the future, but what about U.S players who have yet to receive their funds? Unfortunately, the ruling will not help them at all, and it appears that no effort will be made by the regulator in the conceivable future.

Thankfully, only a few players are owed substantial sums. One player, Valdis Tronenkovs, who is owed $30,000 by Everleaf, went on a rampage, criticizing the LGA for its failure to act in an appropriate time frame and for not making a sincere effort to return player funds. Others have called both the LGA and Everleaf “fraudulent.”

Whether player reactions will cause the LGA to do something remains to be seen, but one thing is certain: burned players will be hard-pressed to trust sites regulated by the Malta Lotteries & Gaming Authority ever again.