Everleaf Gaming, the online poker network made up of approximately 125 individual poker rooms, has begun restricting winning poker players by disallowing access to particular tables populated with an abundance of poorly-rated players. 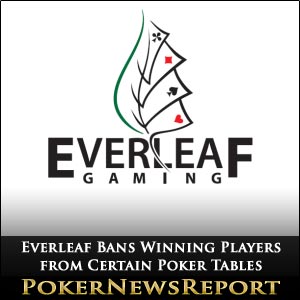 Everleaf Gaming, the online poker network made up of approximately 125 individual poker rooms, has begun restricting winning poker players by disallowing access to particular tables populated with an abundance of poorly-rated players.

Intending to it maintain a “healthy player and financial balance within the card room,” poker players who have tallied weekly winnings over €750 at cash games will receive a pop-up message on their computer screen when attempting to sit in on a restricted table notifying them that they “are not allowed to play on this table because your player rating is too high.” Perhaps a nice stroke of the ego for the successful poker player, in addition to a bit of frustration for being restrained from excelling at a game of your choosing.

It works both ways at Everleaf Gaming. When players rated poorly attempt to join a virtual table of winning poker players, a pop-up warning informs them that “the rating of the table is higher than yours, do you really want to play on this table?” It is not known whether the losing player can choose to not heed the warning and play with the sharks anyway.

The system used to rate individual players appears to be automated based on winnings and losings during the calendar week. A player’s rating starts fresh at midnight on Sunday, allowing players to play anywhere as “all the tables will be made available again.” The precisely defined parameters regulating which tables a winning poker player can or cannot play haven’t been fully disclosed by Everleaf.

In responding to criticism from players who let their displeasure be known on various poker forums and threads regarding the restriction of play, a Minted Poker representative, which is one of the network’s primary brands, answered by noting that the changes affect “less than 0.004% of the entire player pool … It is this 0.004% of the player pool that accounts for over 50% of the net win on the entire network.”

The representative further insisted that Minted “are in no way attempting to justify this decision” and that the online poker rooms were “bound by the rules of the network.” The Minted rep also added that players who “fall into the remaining 99.996% of the player pool … will have easier games.”

This is the second move in recent days by an online poker site or network designed to “level the playing field” by taking away the advantage or edge that winning or more experienced players have over weaker players. Bodog Poker announced last week that it has launched new Bodog Poker software that removes players’ screen names and allows the game to be played anonymously, thereby thwarting the efforts of more experienced players to implement poker-tracking software in an effort to gain an advantage over casual and recreational players.