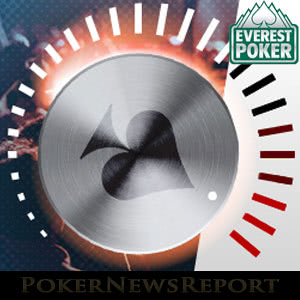 It is a great time to be playing at Everest Poker, no matter what format of poker takes your fancy. Last week the site started its [geolink href=”https://www.pokernewsreport.com/everest-pokers-autumn-festival-starts-on-friday-21913″]€400,000 Autumn Festival tournament series[/geolink], and today a new month-long “October Overdrive” promotion starts for cash game players and fans of the Everest Poker´s hyper-turbo Twister games – with another €92,000 up for grabs.

The October Overdrive promotion will be familiar to regular players at Everest Poker, as it consist of completing simple challenges to be rewarded with entries into a selection of freeroll tournaments. This month however, there are more playable freeroll tournaments than recently, so players should keep a careful eye open for the start of the playable events.

Each day until October 29th, all you have to do to participate in the October Overdrive promotion is opt into the promotion and then select which challenge you want to take on. You can either complete the Twister challenge (play in two Twister games with a minimum buy-in of €2.00) or the cash game challenge – see five flops on NL Hold´em tables with a minimum stake of €0.05/€0.10.

The Weekly and Monthly Overdrive Challenges

In addition to winning your share of €1,500 every day, there is a further €5,000 up for grabs in weekly All-In Shootout tournaments. In order to win a seat in one of these events, you have to either play three Twister games with a minimum buy-in of €2.00 on two consecutive days, or see ten flops at the NL Hold´em tables on two consecutive days.

The biggest prizes of all comes at the end of the month with a €15,000 playable freeroll and a €15,000 All-In Shootout tournament. To qualify for either of these events (you choose which one you want to play in) you have to win three Twister games (min. buy-in €2.00) on ten separate days or win three NL Hold´em cash games at showdown on ten separate days.

The Dates and Times to Watch Out For

With a mixture of playable freerolls and All-In Shootouts, it is important you are in the right place at the right time. Furthermore, although the tournament entry tickets for completing the challenges will be issued automatically, you have to manually register for each event – even though you will not need to be logged into your Everest Poker account to play in the All-In Shootout tournaments.

Get Into October Overdrive at Everest Poker

It is definitely a busy time at Everest Poker and, if you have never played at the site before, it is what you can come to expect when you join Everest Poker. Indeed, new players also get to benefit from the Shasta Sit & Go promotion which gives you the chance to win tournament tickets for free during the first ninety days of being an Everest Poker player.

To find out more about this excellent benefit for new players, plus details of the site´s Welcome Package, [geolink href=”https://www.pokernewsreport.com/everest-poker”>read our Everest Poker review[/geolink]. Our review will give you all the information you need about the site´s first deposit bonus and the excellent VIP Rewards program; but don´t delay too long in signing up for an account as you don´t want to miss out in qualifying for the big month-end tournaments in the October Overdrive promotion at Everest Poker.