This coming Friday (29th September) Everest Poker starts an ambitious Autumn Festival tournament series with more than €400,000 in prize money up for grabs. 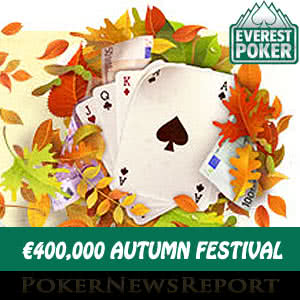 This coming Friday (29th September) Everest Poker starts an ambitious Autumn Festival tournament series with more than €400,000 in prize money up for grabs.

The last few weeks have seen an abundance of tournament series across major online poker sites. Between them PokerStars, Party Poker and 888 Poker paid out more than $100 million in prize money in their respective tournament series, and there is more than $14 million to play for in the Winning Poker Network´s recently started [geolink href=”https://www.pokernewsreport.com/oss-cub3d-relaunched-with-14-million-guaranteed-21895″]OSS Cub3d tournament series[/geolink].

By comparison, the €400,000 guarantee for Everest Poker´s Autumn Festival tournament series looks pretty tame. However, there are two good reasons why players might want to give this series a second look – the quality of the opposition and the potential for overlays. Plus, if you do not already have an account at Everest Poker, you could be eligible for a 200% bonus on your first deposit up to €1,500.

The Quality of the Opposition is Not as Hot

With all due respect to the players who regularly compete in Everest Poker tournaments, the standard of competition on the iPoker Network is not as strong as you will find at PokerStars, Party Poker, 888 Poker or on the Winning Poker Network. Players who play at these sites have joined them to play online poker, whereas the iPoker Network primarily consists of online sports books and bingo sites.

So, although many part-time and recreation players might be attracted by the opportunity to invest €10 in their poker skills in order to win a share of the €10,000 guaranteed prize money in Event #1, few will actually have the skills required to make it into the money – or the patience required to sit through five or six hours of an online poker tournament.

The Potential for Overlays is Massive

Event #1 is not the only one of the forty events in the Everest Poker Autumn Festival to have a prize pool one thousand times the buy-in. Events #9, #11, #29, #37 (the Main Event) and #38 each need to attract one thousand players to break even. Further events need 500 or 750 players to reach their guarantees (particularly the first events each day) and it is hard to know where the players are going to come from.

Plenty of players have “tournament fatigue” after three weeks of non-stop online action; the part-time and recreational players who fail to cash in the early events are unlikely to stick around for the later ones, and the Autumn Festival Main Event (buy-in €100 – prize pool €100,000) coincides with a $50 buy-in OSS Cub3d event with a $200,000 guaranteed prize pool. Which one will players choose?

To support its Autumn Festival, Everest Poker is running a comprehensive satellite schedule offering cheap seats into all the Festival tournaments. At the moment, the satellites are not receiving much attention because a) players typically do not bother qualifying for online poker tournaments until the last minute, and b) it is the final week of the site´s [geolink href=”https://www.pokernewsreport.com/everest-poker-launches-broadway-missions-promotion-21861″]Broadway Missions promotion[/geolink], and players are still trying to qualify for next Sunday´s valuable All-In Shootouts.

Over the next few days, the satellites should remain fairly quiet and provide opportunities for players to qualify for the primary Autumn Festival events easily. Certainly it should be easier than when after the Festival starts on Friday. Furthermore, if you are prepare to stick in a good few hours at the cash tables over the next few days, it may not be too late to qualify for the Broadway Mission shootouts.

The Festival schedule, the satellite schedule and further details about the Broadway Missions can all be found in the Everest Poker client. If you do not yet have an account with the site, and would like to take advantage of a 200% bonus on your first deposit up to €1,500, details of the Welcome Package and the other benefits you can expect to receive can be found on our [geolink href=”https://www.pokernewsreport.com/everest-poker-bonus”]Everest Poker Bonus page[/geolink].