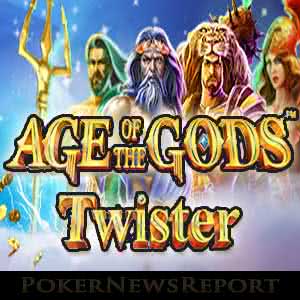 Online poker sites are always looking for innovative ways in which to attract players to the games, and Everest Poker appears to have cracked it with its new “Age of the Gods” Twister games. The games – which have been launched this week – have a buy-in of €1.00 and offer the opportunity for players to win more than €100,000 in each game.

The jackpot element of the game is considerably different from other jackpot poker Sit & Go games in which everybody shares when the top prize is won. Players will be periodically chosen at random to play an animated scratchcard-style game based on the popular “Age of the Gods” slot game. Every player chosen at random is guaranteed a jackpot prize whether they win the Twister game or not.

How the New Twister Games Work

The “Age of the Gods” games consist of twenty coins which the selected player spins over. Behind each coin is one of four symbols – “Power”, “Extra Power”, “Super Power”, and “Ultimate Power”. When the player matches three symbols the same, he or she will win the jackpot prize related to that symbol. The prizes have been seeded with the following amounts, but they could grow to be much higher depending on how many players play the new games and how often the jackpots are won:

Other Differences to be Aware of

The jackpot element of the new games is not the only difference compared to regular Twister games. Whereas you can normally win up to 1,000x times your buy-in in regular Twister games, the top randomly-drawn prize for the “Age of the Gods” Twister games is just 100x the buy-in – although you are five times more likely to win €100 than you are in a regular game of Twister with a €1.00 buy-in.

Another difference to be aware of is that the starting stack in “Age of the Gods” Twister games is only 100 chips (rather than 500 chips in regular Twister games). This means you only have five big blinds when you start each game, so you may need to play more aggressively than normal. On the plus side, games shouldn´t take so long to win if you are dealt pocket Aces in the first hand!

Check Out Age of the Gods Twister Today

Having only been launched this week, the “Age of the Gods” Twister games are receiving plenty of interest due to their novelty value. As mentioned above, the games are played much more aggressively than regular Twister games, and – at the moment – there are plenty of players who have not adopted to the speed of the games and who are there for the taking.

Although the maximum prize money you can win in each Twister game at the minute is limited to €100 (not including anything you win in the scratchcard game), if the games continue to remain popular, Everest Poker may extend the range of buy-ins as the site has done for its [geolink href=”https://www.pokernewsreport.com/get-ready-for-a-wild-summer-at-everest-poker-21768″>Wild Twister games[geolink]. Until then, now is a good time to check out the “Age of the Gods” Twister games at Everest Poker.