Everest Poker is inviting players to complete daily, weekly and monthly Broadway Missions for a chance to share in more than €100,000 during September. 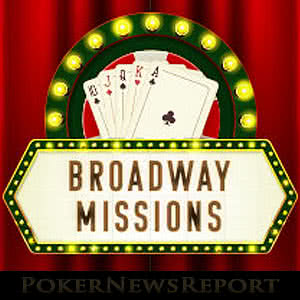 Everest Poker is inviting players to complete daily, weekly and monthly Broadway Missions for a chance to share in more than €100,000 during September.

When it comes to monthly promotions, Everest Poker rarely strays away from a winning formula. The site´s mission-based promotions have been popular for a couple of years and, from today until 1st October, Everest Poker is hosting a new – albeit familiar – promotion called Broadway Missions.

In the promotion, players are “challenged” to complete cash game, Twister or MTT missions every day. On completion of each daily mission, they are awarded a ticket for an All-In Shootout with a prize pool of €1,000. In these events, players have no control over their betting actions and are all-in every hand.

Players who qualify for and compete in three or more daily All-In Shootouts also win tickets to weekly All-In Shootouts, each having a prize pool of €10,000. There is also a month-long cash game mission running alongside the daily and weekly missions with a further €30,000 up for grabs.

How the Daily and Weekly Broadway Missions Work

To participate in the Broadway Missions at Everest Poker, you first have to opt into the promotion via the Mission tab in the poker client. Then, depending on the day of the week, you will be required to complete one of three missions in order to be awarded your ticket to the daily €1,000 All-In Shootout:

Although the tickets for completing each day´s mission are awarded automatically, you will have to register manually for each day´s €1,000 All-In Shootout. The events take place at 7:00pm GMT each day, and registration opens 24 hours before the start of each one. As every player is automatically all-in every hand, there is no late registration in any Shootout event.

While completing the daily and weekly missions, you can also participate in the monthly cash game Broadway Mission. This involves being dealt a number of selected opening hands in regular cash games (again excluding heads-up) with a minimum stake of €0.05/€0.10. You do not have to win with the selected opening hands or even go to showdown for the hand to count against your target.

Once you complete the first stage of the monthly mission, you move onto the next stage. There are eight stages in total to complete (see table below), with an entry into a €10,000 All-In Shootout awarded at the completion of Stage, and an entry into a Freeroll (playable) tournament with a €20,000 prize pool at the completion of Stage 8 – both these events to be played on Sunday 1st October.

Will You be a Star on Broadway?

Everest Poker´s Broadway Missions may lack originality, but they work. Every player has the opportunity to win something in the promotion, with those who have more time to spend at the tables likely to benefit significantly from regular cashes in the daily and weekly shootouts. Naturally the players who will benefit the most are those who finish in the money in the monthly freeroll tournament.

So, will you be a star on Broadway, or simply take what free money is available to you as and when you get the chance to play at Everest Poker? Don´t forget, the site is also hosting weekly Twister Races with €12,500 up for grabs each week and special Rewards Freeroll Tournaments with a further €20,000 in cash prizes throughout October. You can find out more about the other benefits of playing at the site [geolink href=”https://www.pokernewsreport.com/everest-poker”>in our Everest Poker review[/geolink].