After three grueling days of play, the 26 remaining players in the Players Championship are ready to duke it out for the title. 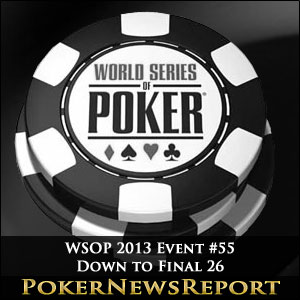 After three grueling days of play, the 26 remaining players in the Players Championship are ready to duke it out for the title.

If Day 2 of the Players Championship was all about the Canadians, Day 3 will be remembered as the day of the no-names. The great thing about the WSOP is that it gives players from around the world the opportunity to establish their presence as a highly recognized pro. Just this year, several formerly unknown players have vaulted themselves into the spotlight.

Take Dana Castaneda for example. Before yesterday the little known semi-pro was just another name. But today, she is known the world over as the first woman to win an open event bracelet since Vanessa Selbst did last year.

Today, all eyes were on Don Nguyen. Probably the most regular looking bloke in the entire tournament, Nguyen, in one day made a name for himself as a mixed games genius. After prodding and poking his way through the pro-laden field, Nguyen currently resides at the top of the Players Championship leaderboard, and is the only player sitting on more than 2 million chips.

Nguyen still has a long road ahead of him. If history is any indicator, dreams of grandeur can quickly turn into early bust-outs – all it takes is a single mistake or the turn of one ugly card. But as of right now, everyone who’s everyone in the poker world knows who the young phenomenon is.

Make no mistake; Nguyen’s rise to the top is no fluke. Earlier this year, the young pro finished second to Mark Radoja in the $10,000 Heads-Up event. Who knows if Nguyen would even be able to afford the entry fee to the Players Championship if it wasn’t for his amazing finish? Nguyen banked over $200k for his second place finish.

Ironically, Nguyen’s heroic effort will all go for naught if he somehow doesn’t manage to crack the top 16. Because there were only 132 entrants into the high buy-in event, only the final two tables (of 8) will be paid. Day 4 will see the remaining players battle down to the final table. A champion will be crowned on July 4th, otherwise known as America’s Independence Day.

In sad news, Doyle “Texas Dolly” Brunson was finally eliminated. The Hall of Famer fought back valiantly but was nursing a short stack for much of the tournament. Still, to have such a poker icon in the field is a testament to the allure of the Players Championship.