French poker players are set to lose €100,000´s later today when the parent company of Europoker.fr is placed into liquidation at a Commercial Court near Paris. 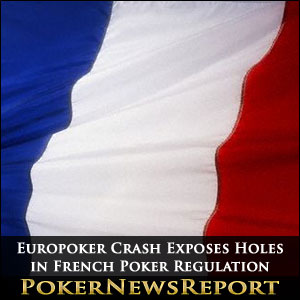 French poker players are set to lose €100,000´s later today when the parent company of Europoker.fr is placed into liquidation at a Commercial Court near Paris.

The migration did not take place and – depending on who´s version of the story you hear – it was either due to the iPoker network´s refusal to accept a site with a preferential bonus structure than other skins on the network, or because of the insolvency of Europoker´s parent company EPMEDIA.

EPMEDIA officially closed its doors on September 26th and basically left everybody in the dark. The Europoker.fr website still advises players that the migration to the iPoker network will take place on September 30th, but players can no longer log into their accounts and request withdrawals online.

Europoker boss Sacha Kechichian reckons that a move to the iPoker network could have kept Europoker.fr alive but, with operating losses of €329,000 in 2012 and assets of only €200,000, it is more likely that the head honchos at iPoker did not want to take on a potential liability – even if the issues over the bonus structures could have been resolved.

Indeed, part of the reason that Europoker got into financial difficulties was that it offered players very generous bonuses and a lucrative rewards program while the site was on the Ongame Network. The French online poker market is very competitive, and Europoker.fr tried too hard to compete against the big boys such as Winamax.fr and PokerStars.fr.

But All the Player´s Money is Safe. Right?

This where the hole in France´s online poker regulations appear. According to the terms of Europoker´s license, the site had to keep player´s “assets” in a segregated trust fund. Europoker interpreted this as being the cash figure of the players´ bankrolls, and the site failed to safeguard outstanding bonuses such as tournament tickets or rakeback.

For some players, their outstanding bonuses represent up to 40% of their cash balances; and it is estimated that the total amount owed to players (including bonuses and rakeback) is in excess of €500,000, whereas the trust fund in which the players´ bankrolls are maintained has a balance of just over €300,000.

The content of the trust fund will be distributed by the liquidator after EPMEDIA is officially put into liquidation later today, and players will receive a full refund of their cash balances. However, those with most to lose from the non-payment of bonuses and rakeback are threatening legal action against the French regulator ARJEL.

Online poker in France is regulated by the “l’Autorité de Régulation des Jeux En Ligne” (ARJEL) who – since the ring-fencing of the French online poker market in 2010 – has overseen a 15% decline in revenues every year. The high levies charged to online operators has forced the industry into a net loss, and players are leaving the regulated sites in droves to find more suitable action elsewhere.

After declaring that online poker was a fad and too complicated for young people to understand, ARJEL President Charles Coppolani was accused of failing to help the poker industry grow and failing to create a safe gaming environment for French poker players. This coincided with a delay in Europoker payments being processed, and Coppolani agreed to meet with a delegation of online poker players next Wednesday 22nd October.

At the meeting, the President is going to face some very serious questioning about the holes in France´s online poker regulations and what he intends to do about them. Already more than 100 players have committed to support a civil claim against ARJEL; and, should Coppolani fail to reassure players that their full Europoker “assets” will be refunded, it is likely that legal action will follow swiftly.

Where to Find Out More Information

There is a very lively thread currently taking place on Club Poker´s forum (If you do not speak French, most online translation services will give you a pretty good gist of the content). The guy to follow is “Suxxortime”, who can be contacted on europoker.action@gmail.com if you are affected by the demise of Europoker, and need to find out more about recovering your bankroll and bonuses.