European Poker Tour Trimmed Down but Amped Up for Season 9 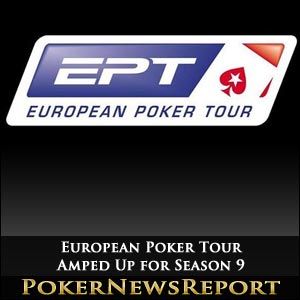 PokerStars have just revealed details of their new and innovative European Poker Tour Season 9 schedule – claiming that it will feature more poker, a better variety of games and greater opportunities for players to qualify or buy-in at levels online that are more attractive.

The world’s biggest poker website – which runs Europe’s most popular and richest tour – confirmed that there will be seven stops in major cities throughout the continent, as well as the always-popular PokerStars Caribbean Adventure (PCA) on Paradise Island at the start of next year.

While that is five down on this season’s schedule, PokerStars also emphasised that this provisional schedule for Season Nine will see the EPT partner with local tours – such as the UK & Ireland Poker Tour (UKIPT) and the Estrellas Poker Tour – at each stop to create larger festivals that will provide even more events with a wider variety of buy-ins to please players of every bankroll.

EPT president Edgar Stuchly believes this trimming of the schedule will be a positive move, saying: EPT Season 9 will bring a new level of innovation to our tour and will enhance the experience for all players.

With the season-ending EPT Grand Final running in Monte Carlo right now, PokerStars took this opportunity to confirm the eight stops on next season’s schedule as they aim to make each leg a spectacular can’t-miss festival of poker with a huge selection of poker action.

The first leg of Season Nine will pull into Barcelona on August 15 for 11 days of action, culminating in the final table of the €5,300 buy-in No-Limit Hold’em main event on the 25th.

Additionally, as alluded to above, the EPT will join up with their regional tour partners to expand each festival and allow players with smaller bankrolls the chance to strike it big.

As such, the EPT and PokerStars will ensure that players have many more chances to qualify online for some of the world’s biggest main events, as well as side tournaments, while also extending the qualifying period for each competition.

Some novel qualifying tournaments have also been introduced – one of which, the Players’ Choice satellites, will see competitors offered the chance to choose which event they want to take part in through winning an EPT package. This qualifying event will begin next month.

Extra High Rollers and Much More

The EPT will, as well as adding more lower buy-in events, include extra High Roller competitions during Season Nine, with every one of the eight stops offering a €10,000 tournament.

Moreover, the tour will also include a new €10,000 buy-in Championship Series for a variety of disciplines, including Pot-Limit Omaha, Heads-Up and Eight-Game, with the EPT’s Live Poker Specialist Neil Johnson saying: We’ve had a lot of fun working with our players and our tournament staff to create some of the most exciting poker tournaments in the world. With all the incredible improvements coming to the tour, many of them created from player suggestions, EPT 9 will solidify us as the can’t-miss destination for European poker.

Next season’s tour will also show distinct improvements in providing players with greater service, with the most obvious example being the introduction of an EPT Hotels Concierge, who will offer personalised attention for (almost) anything players might require – including concert tickets, side trips, and even toothbrushes!

The European Players Advisory Council (EPAC) will also be launched, with interested players meeting up with EPT and PokerStars officials every three months to discuss their experiences and to gain feedback on all things poker-related.

The aim is for the EPT to remain in regular contact with players, so allowing them to respond quickly and easily if any changes are to be implemented as they endeavor to make the tour even better.