European Poker Tour to Return to Dublin Next February

The European Poker Tour is set to return to Dublin for the first time in eight years with an action-packed schedule of sixty-seven events over twelve days. 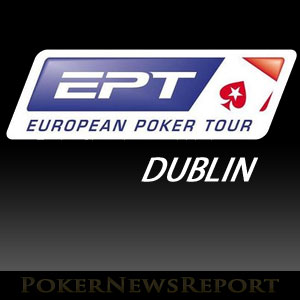 The European Poker Tour is set to return to Dublin for the first time in eight years with an action-packed schedule of sixty-seven events over twelve days.

The last time the European Poker Tour went to Dublin, George W Bush was still President of the United States, a Euro was worth $1.50 and Jose Mourinho was just about to finish his first spell as head coach of Chelsea FC. The first Harry Potter book had just been released, Microsoft had just launched Windows Vista and “No Country for Old Men” was packing the cinemas.

At the time of the last EPT Dublin, Jerry Yang was the World Series of Poker Main Event champion and Jonathan Little was about to become the WPT Player of the Year. In the EPT Dublin Main Event itself, Reuben Peters defeated Annette Obrestad heads-up to win €532,620, just weeks after the young Norwegian had become the youngest player ever to win a WSOP gold bracelet.

A Return to the Royal Dublin Society

The 2016 EPT Dublin from February 9th to February 20th sees a return to the Royal Dublin Society in the Ballsbridge area of Dublin. This venue is the home of Leinster Rugby team and has hosted many notable events – not least concerts by U2, Bruce Springsteen and Michael Jackson. It was the venue that hosted the Dublin leg of the first ever European Poker Tour in 2004 – the Main Event on that occasion being won by Ram Vaswani, one of the original founders of the Hendon Mob.

Next February´s schedule of events will look very strange to players who remember 2004, as it not only includes European Tour events, but coincides with a stop of the UK and Ireland Poker Tour and includes the Dublin Poker Cup. In addition to the €5,300 buy-in EPT Main Event there will be four Hi-Roller events – with buy-ins ranging from the €2,200 UKIPT High Roller up to the €25,750 buy-in EPT High Roller. Other feature (or novelty events) to look out for include:

Qualify for Less at PokerStars

Online qualifiers to the major UKIPT and EPT events have already got underway on PokerStars (except in Spain, Italy and France – where they start at the end of January). Satellites to the EPT Dublin Main Event start at €10.20, and some of the qualifying routes offer a “package” as the first prize. Unfortunately this package only consist of €700 spending money, so you are still going to have to book your flights and accommodation separately.

If you are planning to attend the EPT Dublin, please be aware that the event clashes with the Dublin Poker Festival at the Regency Hotel. Accommodation is likely to be pretty limited with two major poker events being hosted simultaneously, so book early to avoid disappointment. Otherwise you might end up sleeping on Max Silver´s floor!