The PokerStars sponsored EPT starts its ninth season at the Arts Hotel in Barcelona while the first online qualifiers are launched for the Caribbean Adventure. 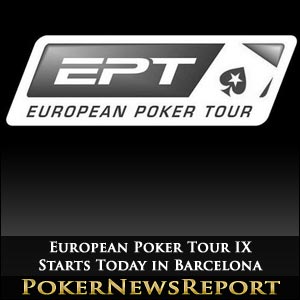 Eight years ago next month, Sweden´s Alexander Stevic won the first ever PokerStars European Poker Tour Main Event in Barcelona and collected the princely sum of €80,000 for his victory. While Stevic has enjoyed limited success since his win, the PokerStars EPT has grown into one of the most eagerly anticipated live poker events in Europe and beyond – regularly attracting high-profile poker players from the States and having paid out more than €275 million ($340 million) in Main Event prize money.

This year´s EPT Barcelona synchronises with the conclusion of the Spanish Estrellas Poker Tour (“Estrellas” means Stars in Spanish), and the kick-off event for eleven days of poker pleasure is the Estrellas Main Event. This tournament is a €1,000 + €100 buy-in three day event (two Day 1´s) which conveniently finishes just before the first Day 1 of the EPT Barcelona Main Event on Sunday. Just 229 players competed in the first EPT Barcelona Main Event – a number which by 2011 had grown to 811, and one which is expected to be exceeded this year due to a record number of players having qualified online.

Among the 49 side attractions complementing the EPT Barcelona Main Event are a $50,000 buy-in Super Hi-Rollers tournament, Heads-Up Championship and Women´s Event. The EPT Barcelona is also going to be broadcast on pokerstars.tv so, if you are unable to attend the event yourself, you can watch online from the comfort of your own home while attempting to qualify for one of the later European tour events.

Speaking of online qualifiers – PokerStars have just launched the first satellites for their PokerStars Caribbean Adventure which takes place at the Atlantis Resort & Casino in The Bahamas from 6th to 15th January and forms leg 4 of the 2012-2013 European Poker Tour. Sub-satellites start from $1.10 for the $700 weekly PCA qualifier and there are also $33.00 re-buy tournaments running under the “PCA – Cash Satellites” tab on PokerStars with guaranteed packages up for grabs.

Winners of the PCA packages will receive a thousand dollars towards their travel expenses, nine nights’ accommodation at the Atlantis Resort & Casino, another thousand dollars in room credit (for food and drinks) and a seat at the $10,300 buy-in PokerStars Caribbean Adventure Main Event. Last year John Dibella collected $1.775 million in the event which had a prize pool in excess of $10 million, and previous winners include Gus Hansen (2004), Bertrand Grospelier (2008) and Canadian Poorya Nazari who, in 2009, collected a first prize of $3 million after winning his seat in one of the aforementioned $33.00 re-buy qualifiers!