The PokerStars sponsored EPT London has 31 live poker tournaments, with the feature tournament being the £5,250 buy-in Main Event. 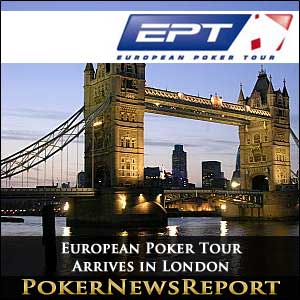 A host of well-known poker “celebrities” will rub shoulders with online poker qualifiers – each looking for that deep run that could turn them into dollar millionaires.

So Big, They Needed Two Casinos to Host It

The task of hosting the EPT London has been divided between the London Hilton Metropole Hotel and the Grosvenor Victoria Casino – both a short walk away from Marble Arch and both accustomed to hosting major poker events. The Metropole will stage most of the feature events, while the Grosvenor (or “Vic” as it is affectionately known) will cater for super satellite qualifiers and those who want a little cash action while waiting for their tournament to start (You can see the EPT London schedule here to see what is on when and where).

Part of the London Festival of Poker

The European Poker Tour plays a significant part of the London Festival of Poker, which started earlier in the month with the European Poker Championships at the Vic and would have concluded with the WSOPE Main Event had that not been moved to Cannes (anybody remember Phil Hellmuth´s ludicrous entrance at the Empire Casino last year? And the year before?). Sadly, Phil will not be in London for the European Poker Tour 2011 but Daniel Negreanu eventually settled on a hotel and will be joined at the tables by confirmed entrants Jason Mercier, Jonathan Duhamel, Bertrand Grospelier, Joe Cada, Boris Becker, and Viktor Blom (all entered for Day 1B if you want to avoid them!).

The Climax of the UKIPT

The EPT London Main Event also provides the climax for the UK and Ireland Poker Tour (also sponsored by [geolink href=”https://www.pokernewsreport.com/pokerstars”]PokerStars[/geolink]) and the three players who have been performing consistently well throughout the nine event series will win season tickets to the UKIPT Main Events in 2012. There is also a £10,000 freeroll event for the top 100 in the Leader Board Challenge and, with 77.50 points available for the winner of the EPT London Main Event, anybody in the current Top 10 could still claim the title – anybody at all could still qualify for the freeroll!

The EPT London will feature four “Twitter Walls” (see photo underneath) which will keep players, spectators and social media users all over the world up to date with events both on and off the tables. A special Twitter Quest Treasure Hunt will also take place on Sunday October 2nd in which the person who successfully works out the “secret location”, plays (and wins) a five minute heads-up game and then conquers a 9 seater Sit n Go will be rewarded with a seat in the £330.00 “Win the Button” side event which takes place at 8.00pm that evening – it could be a long day if you run deep in the target tournament as the Treasure Hunt starts at 8.30am! 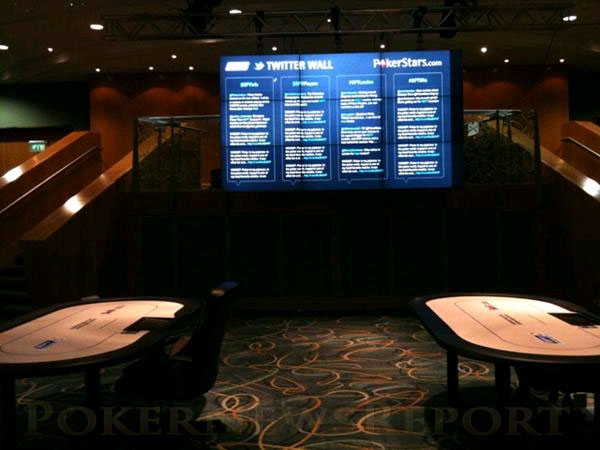 Keep up to Date with Poker News Report

All through next week, Poker News Report will be reporting on the best “Tales from the Tables” and wading through the thousands of Tweets and Facebook postings to provide the latest poker news from London. Make sure you get the best coverage of the European poker Tour London from Poker news Report.