Leading poker website PokerStars have announced that three more poker tournaments have been added to season eight of the European Poker Tour (EPT). 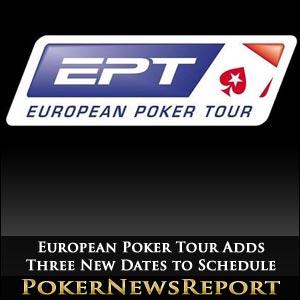 Leading poker website PokerStars have announced that three more tournaments have been added to season eight of the European Poker Tour (EPT).

The three extra stops will take the EPT – which started in 2004 – to Italy, Spain and Germany, with Berlin and Madrid again being visited, while Campione, in the Lombardy region of Italy, will play host to its first ever tour event.

The first of the new stops will pull into Madrid’s Casino Gran Madrid Torrelodones from March 12 to 17 following last season’s successful Grand Final, while the inaugural Campione event – to be held at the Casino Municipale di Campione d’Italia alongside the picturesque Lake Lugano – follows just nine days later for the March 26 to 31 tournament.

Campione has been visited many times on the PokerStars Italian Poker Tour (IPT) and will certainly attract numerous big-name pros when it hosts its first EPT event.

Berlin back on the EPT Calendar

The final extra date arrives in Germany for the EPT Berlin at the Spielbank from April 16 to 21 and will – like the other latest additions – hold a €5,000+€300 buy-in main event, as well as several side tournaments.

Edgar Stuchly, the EPT president, said: “We’re delighted that the EPT will be returning to two major capital cities (Madrid and Berlin) in Europe, both of which have proved to be highly popular locations in recent years.

“We’re also very excited that the tour is, for the first time, heading to the highly exclusive region of Campione in Italy, further extending the reach of the EPT. ”

Of course, some of the world’s best poker players will already be preparing for the PokerStars Caribbean Adventure (PCA), which kicks off on January 5 and runs until the 15th.

Also previously announced are stops in Deauville and Copenhagen. The former stops in at the Casino Barriere from January 31 until February 6 and possesses a €5,000+€300 buy-in main event, while the Copenhagen leg runs from February 20 to 25.

This Danish event will offer players a 35,000 DKK+2,250 DKK buy-in main event at the Casino Copenhagen.

Early schedule of Remaining Events for the EPT Season Eight