The European Parliament has voted to support a recent report that suggests a tougher stance must be taken to harmonise online gambling laws across Europe. 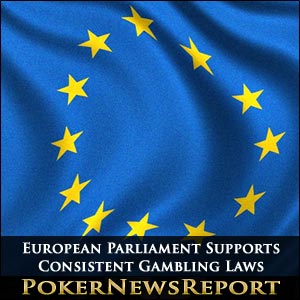 The European Parliament has voted to support a recent report that suggests a tougher stance must be taken to harmonise online gambling laws across Europe.

With the USA still struggling to come to terms with the events of Black Friday back in April, the European Union is taking steps to bypass individual state laws to produce a unified law that will be adopted across the economic block.

Jurgen Creutzmann, a German MEP (Member of the European Parliament), drafted the report and recommended that a common and accepted collection of laws supporting consumer protection be put in place in relation to online gambling.

This is a curious development, however, after the EU had supported the maintaining of the status quo by letting individual nations set their own online gambling laws.

Now, though, it appears the European Parliament is ready to move towards cooperation between countries’ regulators and the employment of a more consistent infringement procedure.

European Gaming and Betting Association (EGBA) secretary general Sigrid Ligné is in favour if this move, saying: “This vote constitutes a very welcome shift in the position of the European Parliament.

“Time is of the essence given that it is precisely now that Member States are pushing ahead and re-regulating their national online gambling markets.

“Today the (European) Commission has received political support to initiate EU actions. But any EU level action can take years to be adopted and this cannot be a pretext for inaction against Member States that infringe EU law.

“As the guardian of the Treaties, the Commission must act to curb further fragmentation of the internal market by consistently declaring protectionist national regimes to be incompatible with EU law.”

Of course, online gambling laws across the EU are not consistent at this time, so it will be interesting to see how nations such as Germany, Spain and Denmark react to the report as they follow in the footsteps of Italy and France, who have recently regulated their markets.

Meanwhile, Microgaming, the Isle of Man-based software development company, has brokered a deal with British bookies Ladbrokes to provide them with their online poker and casino software for the Spanish and Danish markets.

The new software should be running live in both countries come January of next year after licensing was agreed to allow clients access to Microgaming’s Flash-based titles.

Microgaming’s head of business development Andy Clucas said: “We have had a long and successful relationship with Ladbrokes and are delighted to be entering these two exciting markets with it.”

Additionally, the Harrow-based bookies’ director for corporate and strategic development Adam Greenblatt said: “We have a strong relationship with Microgaming and our players have always reacted well to its products.

“We are pleased to be working with it as we target new licences in Spain and Denmark, which are markets familiar to Ladbrokes already.”

Ladbrokes aim to renew licences in the Spanish and Danish markets at an interesting time, as mentioned above, so we’ll keep an eye on future developments.