The PokerStars Eureka Main Event currently being played in Vienna set a new entry record for the Tour – with 1,432 players entering over the two opening flights. 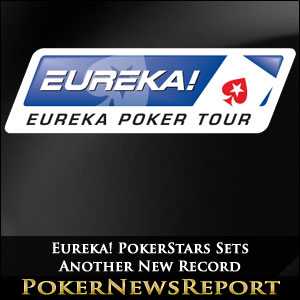 The PokerStars Eureka Main Event currently being played in Vienna set a new entry record for the Tour – with 1,432 players entering over the two opening flights.

After last year´s record-breaking Eureka Main Event in Prague – in which Dmitri Holdeew topped a field of 1,315 players to take home the €226,400 first prize – it was considered unlikely that the Eureka Poker Tour would not see a field of that size again until the Tour returns to Prague later this year.

However, on the first stop of the 2014 PokerStars Eureka Poker Tour, 1,432 players ponied up the €1,100 buy-in or qualified online for the Main Event to set a new record which is unlikely to be surpassed until … … probably the next stop of the Tour in Rozvadov in May.

The last few months have seen entry records tumble at PokerStars all over the world. The previous Eureka Tour record was set in Prague in December, just after the PokerStars Estrellas Poker Tour in Madrid had set new records for a tournament hosted in Spain.

Meanwhile, Back in Vienna …

The PokerStars Eureka Main Event in Vienna was not just noteworthy for the quantity of players that showed up at the magnificent Hofburg Palace, but also for the quality of the field that was assembled. Online qualifiers and locals were joined at the tables by former EPT Main Event winners Steve O´Dwyer, Zimnan Ziyard and David Vamplew, while Mickey Petersen, Max Lykov and Bertrand “ElkY” Grospelier were among the PokerStars Pro players who made an appearance.

However, after ten levels of play on each of the opening two flights, it is a local qualifier – Gerald Karlic – who leads the 399 survivors into Day 2 of the tournament. Karlic topped the Day 1A field with 241,500 chips, while the chip leader on Day 1B – Mateusz Warowiec from Poland – finished the day with 224,800 chips.

More Records to be Set Online This Weekend?

PokerStars will also be hoping to set new online records this weekend when their MicroMillions 7 Series come to climax on Sunday with the $1 million guaranteed Main Event. The current record for entry into MicroMillions Main Event stands at 65,397, and was set in November last year when “TheManM” from Brazil pocketed $126,000 after a three-way deal at the final table.

The biggest individual win in a MicroMillions Main Event was recorded in July 2013, when a Lithuanian player by the name of “stygher” turned a $22.00 buy-in into $160.726 after refusing to make a deal at the final table. The entry for that event was 59,213 and – two days before this year´s feature gets underway (scheduled for 8.30pm CET on Sunday) – thousands of players have already qualified through satellites or bought in directly.

Qualify for the MicroMillions Main Event for Just $1.00

Tonight (Friday) PokerNewsReport is hosting its very own MicroMillions Main Event qualifier on PokerStars at 8.00pm (CET) with 20 seats added to the prize pool. Buy-in to the tournament is just $1.00, but you will also need the password “PNREPORT” to get into the game. The event can be found under the “Private” tournies tab and has the tournament ID #882134709.

With 20 seats added to prize pool, there is sure to be a considerable amount of value for players who take part in the PokerNewsReport MicroMillions qualifier – but players should be aware that the tournament is capped at 1,000 players, so register now!