The Eureka Poker Tour Bulgaria Main Event has started in the northern resort of Golden Sands, near Varga, with Day 1A getting underway on Wednesday. 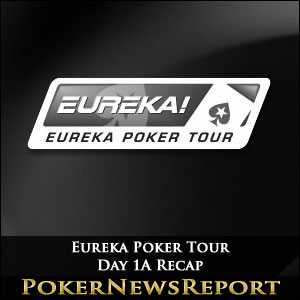 The Eureka Poker Tour Bulgaria Main Event has started in the northern resort of Golden Sands, near Varga, with Day 1A getting underway on Wednesday.

The first starting flight saw a total of 185 players from all around Europe take to the felt in an attempt to make it to the second day of the four day event. Tournament organisers expressed their delight at the turnout at the start the Season 3 event, and believed the total number of participants could reach 400.

If they are right, it would be a record turnout to the €1,100 (around US$1,450) event up to now, with last season’s Main Event having a total field of 308 players. It would also mark the second straight time participant numbers in the Eureka Bulgaria Main Event have increased, a strong sign of its growing appeal in European poker.

A total of 83 players made the cut to Day 2 after nine hours of play on Day 1A. The chip leader at the end of the first starting flight was Greek player George Vranas, who finished the day with a stack of 120,100 to his name. That is a little over 14,000 more than Richard Larsen, who finished second on the chip ladder with 106,000.

Jaroslaw Sikora was the other player to finish Day 1A with a stack of six figures, with 100,900 chips. Not far behind Sikora is hometown hero Damyan Danchev, who had a stack of 97,600 when the first starting flight ended.

Another notable player who made the cut is defending champion and fellow Bulgarian Petar Zografov, who also had a 23rd place finish at the WSOP $5,000 No Limit event (#57) earlier this month.

The defending champ was in some trouble earlier on in the starting flight, but managed to have a few good plays later on in Day 1A to finish with a stack of 27,300. That may be fairly low compared to some stacks, but Zografov can never be counted out due to his experience in poker and previous prowess in the Eureka Poker Tour Bulgaria.

Day 1B of the Eureka Poker Tour Bulgaria is set to take place later today at the Golden Sands, where players will vie to join the 83 players from Day 1A to duke it out for the top spot.