There is only six days to go before the PokerStars Caribbean Adventure (PCA) kicks off on the beautiful Paradise Island in The Bahamas – and that thought has Team PokerStars Pro Eugene Katchalov raring to get going. 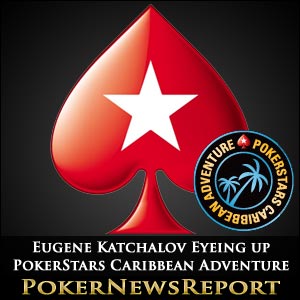 There is only six days to go before the PokerStars Caribbean Adventure (PCA) kicks off on the beautiful Paradise Island in The Bahamas – and that thought has Team PokerStars Pro Eugene Katchalov raring to get going.

Eugene Katchalov, the one-time World Series of Poker (WSOP) bracelet winner, will be aiming next Thursday to defend his $100,000 buy-in Super High Roller event from last year, when he picked up $1.5 million for defeating fellow Team PokerStars Pro Daniel Negreanu – as well as outlasting 36 other players – in their heads-up clash for the top cash from a prize pool of $3,743,000.

The Ukrainian enjoyed a fantastic 2011 PCA as, just 10 days later, he finished second in the $10,000 High Roller (six max) event to Russian Alexander Kostritsyn to add another $131,920 to his live earnings.

Now, with the opening event of 41 so close at the Atlantis Resort and Casino, Katchalov is eager to get to the tables in anticipation of another successful trip to the Caribbean for what will once again by a thrilling 10 days of action.

The 30-year-old spoke at PokerStarsBlog about the upcoming event, saying: “I am really excited about the 2012 PCA. It is always fun defending a title and I would love to repeat the win – even though successfully defending a title is so rare in a poker tournament.”

But Katchalov is sure to face tough competition as some of the world’s best-known players have already signed up for the event, including high stakes specialist Bryan Colin, Canadian star Mike ‘Timex’ McDonald and Japanese businessman Masaaki Kagawa, as well as Team PokerStars Pros Jason Mercier, Jonathan Duhamel and Bertrand ‘ElkY’ Grospellier.

However, the star just needs to look back to January of this year for inspiration and said: “It felt amazing to win the Super High Roller. In that tournament, you are playing the best players in the world and that forces you to play your A game.”

As should be expected at such an event, Katchalov found it to be “a very tough final table – everyone there was really good”.

However, while the Brooklyn-based pro was thrilled to win the title, he would have been happier facing someone other than Canadian superstar Negreanu.

He added: “My best friend, Nick Schulman, made the final, too, and we were kind of hoping we would end up heads-up, but Nick finished fourth.

“I knew it would be hard to play Daniel because, at the time, he was training to play Viktor Blom in the Super Star Showdown on PokerStars.

“Because of that, he had been really focusing on heads-up and talking to a lot of good heads-up players.

“At the start of the heads-up, we were about even in chips. I took the lead in the first half-hour, but Daniel is great as a short stack and it lasted for nearly three hours.”

Katchalov – who took down event #5, a $1,500 buy-in Seven Card Stud tournament for $122,909 at this summer’s WSOP in Las Vegas – was signed up by PokerStars not long after his PCA success.

But the Ukrainian – whose biggest win came in December of 2007 at the World Poker Tour (WPT) $15,000 buy-in No-Limit Texas Hold’em event at the Doyle Brunson Five Diamond World Poker Classic – was at pains to point out that he was previously in discussion with the poker website about joining their team of pros.

With a smile crossing his face, Katchalov added that “maybe that win sealed the deal”.

Whether that’s true or not is unimportant as Katchalov, who has about $7 million in live tournament earnings from his career, will be sporting the PokerStars livery once again next week in the Caribbean.

Over 200 entrants left with cash from that event – and there is every likelihood that the prize pool will be even more impressive once the winner is revealed on Friday, January 13, as organisers expect an even bigger turnout next week.

All you poker fans out there can tune in to see how the American gets on as Day 1b onwards will be televised.

Incredibly, the vast majority of players who have signed up for the main event won their seats via PokerStars – and poker fanatics the world over will most certainly recognise many of the names already on the starters sheet.

Team PokerStars Pros Out in Numbers

Additionally, a trio of PokerStars Team Online players have also registered and they are Shane Schleger, Anders Berg and Kevin Thurman.

While that sextet secured their places back in March, the PCA qualifiers are still running with two more events still to come after today.

Tomorrow will see a $215 buy-in satellite run from 12:30 at PokerStars, while a $33+Rebuy-3xT buy-in event begins at 16:41. Both of these tournaments will provide two packages to the PCA.

Then, on Sunday, at 05:00 there is a $320 buy-in satellite that supplies one PCA place, before a $700 buy-in satellite offers 30 packages. The penultimate qualifier is at 16:41 and is a $33+Rebuy event that guarantees one place, while the last satellite arrives at 18:00 and is a $530 buy-in event that will see two players flying out the Caribbean.