South African Eugene Du Plessis will enter the final day of the $1,500 buy-in Ante Only No-Limit Hold’em event #49 of the World Series of Poker as chip leader. 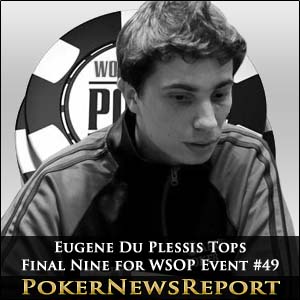 South African Eugene Du Plessis will enter the final day of the $1,500 buy-in Ante Only No-Limit Hold’em event #49 of the World Series of Poker as chip leader.

The Stellenbosch player bagged up with 996,000 to take his seat on top as the Day 2 starting field was hacked back from 110 to just nine survivors at the Rio All-Suite Hotel & Casino in Las Vegas.

Vegas-based Mike Sowers will start Day 3 second in chips on 824,000 while Oregon’s Seth Davies holds 640,000 as a distant third, although – like all survivors – he will still be in with a good shout of collecting the gold bracelet and $256,691 top prize because of the ante-only structure of this tournament.

Day 2 was, just like the opening day, brutal at the Rio as competitors hit the rail at an exceptional rate, resulting in tables being regularly broken up as players were scattered to all corners of the Amazon Room.

But, with there being no blinds, it was surprising to see the scheduled 10 levels of play cut short after the nine-handed final table was set with one-and-a-half levels still available.

Of course, the eliminations did slow down eventually as 18 players fought it out to collect the winner’s cheque. But exits there had to be, with players such as Italy’s Lorenzo Sabato finishing 18th for $9,431, Scottsdale’s Bryan Pimlot falling in 16th for $9,431 and Canada’s Garth Arnason leaving in 14th for $11,612.

Mike Sowers On the Move

Sowers was acquiring lots of chips now as he eliminated several players, even seeing his pocket kings overcome the aces of New Jersey’s Daniel Buzgon when a king came on the flop to hand the former trips. That saw Buzgon exit in 12th place for $14,477.

One-time WSOP bracelet winner Erick Lindgren was also gaining momentum, before he lost a sizeable chunk of his chip stack to De Plessis. That success saw the South African get close to the chip lead, which he eventually gained after trading chips with Sowers.

However, Californian Lindgren struggled thereafter and continued to lose chips – before eventually finding himself facing De Plessis once more. It was the same outcome, only this time Lindgren was eliminated in 11th place for $14,477.

Nevada’s Jon Turner was an early chip leader, but he exited in 31st place for $6,478 after suffering several bad beats, but not before he had sent Houston’s Melanie Weisner to the rail in 57th for $4,044 after he hit a straight.