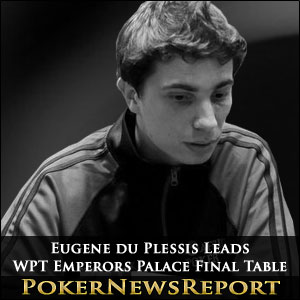 The final table of the WPT Emperors Palace Poker Classic Main Event will re-commence this afternoon with local poker player Eugene du Plessis being in control of almost half the chips in play. Du Plessis started Day 3 in third position of the twenty-seven players that remained behind last year´s winner of the event, Dominik Nitsche, and Matt Lawrence – who got engaged during play on Day 2.

Du Plessis and Lawrence were to be the dominant forces during Day 3, after Nitsche lost half his stack to the aggressive Aston Soon Shiong during the second level of the day, and a titanic clash between the two chip leaders saw Du Plessis cripple Lawrence – who was eliminated soon after to be the final table bubble boy.

Eugene du Plessis started Day 3 of the WPT Emperors Palace Poker Classic in the best possible way, by taking down the first two hands at his table to move into the chip lead, and then extending his advantage by eliminating Warren Zachary in twenty-third place J♠ J♥ > A♦ K♦.

Dominik Nitsche briefly regained the chip lead when taking his revenge on Aston Soon Shiong 4♣ 4♦ > A♦ K♦, but moments later allowed Matt Lawrence to double-up through him 6♣ 6♦ > A♠ Q♣. A further double-up by Lawrence against Wesley Wiegand moved Matt Lawrence briefly into the chip lead, before Eugene du Plessis put Lawrence in a pre-flop fold or shove position – and the American chose to do the former.

Eugene du Plessis and Matt Lawrence continued their confrontation as the remaining players converged onto one table – with du Plessis often coming out on top – and eventually the two chip leaders clashed in a titanic hand.

Following the Turn 9♥ Matt Lawrence check-called Eugene Di Plessis´ bet of 280,000 chips, and both players checked the J♥ River – Du Plessis rolling over his pocket Fives for a turned full house, while all Matt Lawrence could show was a missed flush draw.

Matt Lawrence´s tournament lasted just ten minutes more. Eugene du Plessis opened for 60,000 chips from under-the-gun. Matt Lawrence moved all-in from the cut off, and Daniel Brits made the call from the hijack seat. Du Plessis folded and Lawrence was in trouble with 7♥ 7♣ against Brits´ 9♣ 9♠. The 9♦ on the flop sealed Lawrence´s fate, and he was bust from the WPT Emperors Palace Poker Classic in seventh place.

Behind the runaway chip leader Daniel Brits has momentum on his side. Brits finished the night with his biggest stack of the tournament so far after making an unlikely recovery from being all-in with 7♦ 7♠ against Ka Kwan Lau´s K♣ K♠. The 7♥ on the flop saved his tournament life, but a more incredible hand was still to come.

On a board of J♦ 10♥ 5♠ / Q♦ Daniel Brits (K♣ Q♣) moved all-in against Benjamin Cole (Q♠ Q♥). Cole made the call, and was well ahead with his set of Queens, until the A♠ spiked on the River to complete Brits´ straight draw. The elimination of Matt Lawrence (above) enabled Brits to move into second place overnight – although with a chip stack half the size of Du Plessis.

Despite having a roller-coaster day, Dominik Nitsche still has a workable 36 Big Blind chip stack. Nitsche finished strongly to bust Harold Brooks in ninth (5♥ 5♦ > A♠ K♣) and Day 1A chip leader Nahum Lum in eighth (10♥ 10♠ > A♣ 9♦) and last year´s winner of this event has the experience and technical ability to mount a formidable assault on the chip leader when play resumes later today.

Behind the three chip leaders, Wesley Wiegand, Rob Fenner and Ronit Chamani each have around fifteen Big Blinds and will have to move early if they are to have any impact on the conclusion of this year´s WPT Emperors Palace Poker Classic. Wesley Wiegand has been here before – he finished fourth in last year´s event – while Rob Fenner won the Vanderbijlpark WSOP Circuit High Rollers last year and Ronit Chamani will be aiming to become the first-ever female winner of an open WPT Main Event.