There have been major worries over the future of the Estrellas Poker Tour recently, with fears that there would be no season three. 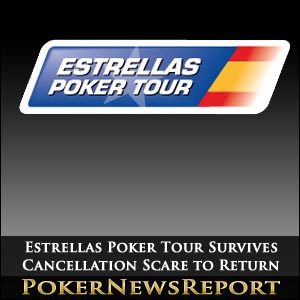 While it is encouraging to see so many events added to the calendar for 2012, there had been major worries over the future of the Estrellas Poker Tour recently, with fears that there would be no season three.

It was something of a shock that this successful Spanish poker tour might be coming to a premature end as the first two seasons had attracted thousands of entries to produce a total prize pool of over €2,400,000.

But those fears surrounding the tour – which emerged due to recent new online gambling laws being adopted in the Iberian nation – have been allayed after PokerStars announced the return of the popular series for next year with details of season three being revealed.

Juan Manuel Pastor, a Spanish member of Team PokerStars, was thrilled to hear the good news, stating that he has “played almost every Estrellas event” since the tour began.

He added that he believes each tournament is “dynamic, fun and special – special because you sit down to play with players who you’ve spent years sharing tables with, as Spanish poker has developed”.

In fact, Pastor reckons that, “every time the best players come, the quality of the events just gets better and better”.

Another Spanish Team PokerStars Pro, Ana Marquez, was also happy to see the tour return, saying that, while she has only taken part in a few Estrallas, “because so far my career has focused on the US Tour”, she has always “enjoyed playing against good players”.

Therefore, the pro – whose best finish at the World Series of Poker (WSOP) was 32nd at this summer’s event #8, a $1,000 buy-in No-Limit Hold’em – is looking “forward to the beginning of the third season, which will be the first whole season I play, and I’m hoping for some good results”.

The third season of the Estrellas Poker Tour will include five legs, starting in the Gran Casino Madrid on January 23 and featuring a €1,000+€100 main event that runs from the 25th to the 29th.

The Estrellas Leaderboard will also return for the third season, with the player having accumulated the biggest points haul over the five legs being announced as the Estrellas Player of the Year for a hatful of quality prizes from PokerStars at the Spanish Poker Awards ceremony in early 2013 when the fourth season kicks off.

Certainly, 2010’s Leaderboard champion, Spaniard Alvaro Santamaria ‘Varosky’ Velasco, knows what taking that top spot means as he was handed entry to every main event for season three as a portion of his prize for taking the season two title.

Of course, there will also be numerous side events taking place at each of the five venues – and full details of these can be found by visiting www.estrellaspokertour.com.

Those interested in playing on the tour can also visit PokerStars.com to sign up for satellite events.