ESPN’s annual coverage of the WSOP Main Event will kick off on July 23, 2013. 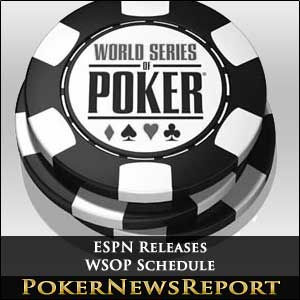 ESPN’s annual coverage of the WSOP Main Event will kick off on July 23, 2013.

Buckle your seatbelts, and get ready for some high drama. The 2013 World Series of Poker is coming back to Tuesday nights on ESPN, with coverage beginning on July 23rd and running all the way to November 5th. On that date, a new Main Event champion will be declared in front of a live audience.

Dynamic duo Norman Chad and Lon McEachern will be calling the action for an 11th consecutive year. They will be joined by sideline reporter Kara Scott.

This year’s televised schedule will reflect recent changes made to the WSOP’s schedule. For one, the first week will cover the inaugural Asia-Pacific Main Event Final Table. Won by now five-time bracelet winner Daniel Negreanu, the event drew 405 of the world’s finest players, and took place over several days in mid-April. It was Negreanu’s second final table of the series, propelling him to an early lead in the Player of the Year standings.

Week 2 will highlight the WSOP National Championship Final Table. Featuring the best circuit grinders in the world, televised coverage of the prestigious invite-only event feels long overdue. This year’s final table was won by at-large entry Jonathan Hilton, who bested a field of 127 entrants en route to a $355k payday. It was the only U.S-event held outside of Las Vegas to reward the winner with WSOP gold.

Main Event coverage will begin on August 6th, 2013. Like last year, Days 1 and 2 will not be featured, with ESPN making the decision to devote more coverage to the more exciting days, namely 3 through 7. Each week will feature two one-hour blocks, beginning at 9 PM EST and running through 11 PM. Days 3 through 6 will be spread out over four episodes, with a whopping six devoted to Day 7 alone.

Virtually live coverage of the final table will begin at 8 PM ESTon Monday, November 4th, and will run until only three players remain. The final three will meet again on the 5th at 9 PM, and duke it out until a winner is declared. We say “virtually live” because the televised broadcast will be on a 15 to 30 minute delay. This delay prevents railbirds from providing immediate assistance to players. However, players will be able to see what their opponents were holding shortly after the hand concludes.