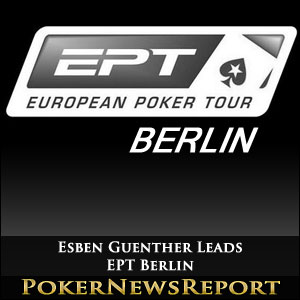 Based on the volume of players that flocked to the Grand Hyatt Hotel for the first major tournament of the EPT Berlin, the German capital looks like being the centre of the poker world for the next ten days. Forty-five events are scheduled to be played before the series wraps up and heads to Monte Carlo for the EPT Season 9 climax – including the €5,300 buy-in EPT Berlin Main Event, which last year paid €712,000 to the winner Davidi Kitai.

The first major tournament of the series – the €1,100 buy-in Berlin Cup – attracted 911 players over the first two Day 1s; smashing the €500,000 guarantee put in place by series sponsor PokerStars, and creating such an overflow of players that the nearby Sternberg Theatre in the Casino Berlin was commissioned to help cope with the numbers.

Guenther the Man at the Top

Only 112 of the remaining 281 players remaining will cash in the event – with €180,000 up top for the winner – so Day 2 of the Berlin Cup should be a cagey affair. When players take their seats this afternoon, blinds will be 600/1,200 with an ante of 100 chips and those not too concerned about being blinded out at the start of the day include:-