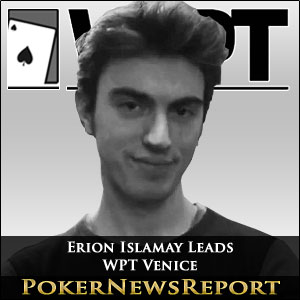 Eighteen of the thirty-six players who took their seats at the Casino di Venezia on Day 3 of the WPT Venice remain alive in the Main Event after a painfully slow six levels of play, which ended with Italian poker player Erion Islamay leading the tournament from compatriots Marcello Montagner and Giuseppe Pastura.

Behind the trio of Italians, the field is packed together – indeed only fifteen big blinds separate the top eight players – and includes the likes of Party Poker Pros Mike Sexton and Kara Scott, Day 2 chip leader Ludovic Lacay and runner-up in the 2011 World Series of Poker Main Event, Martin Staszko.

Only Twenty-One Made the Money

One of the reasons for the slow play on Day 3 of the WPT Main Event was that only twenty-one of the players were going to cash in the event. Those we lost before the bubble burst included Liv Boeree, Dan Cates and Marvin Rettenmaier – who was busted after his Ace and King both paired on the flop, but a Queen on the river gave Xia Lin a set to eliminate the dual WPT winner.

Club WPT qualifier Socrates Ioannides also failed to capitalise on his good run – being out-kicked by Max Pescatori after both players made two pairs – and Pescatori later becoming the bubble boy when Matt Salsberg (8♦ 8♥) flopped a set of Eights to leave Pescatori (K♣ 5♣) penniless.

Then the Action Slows Even More

Immediately after the bubble had burst, a trio of eliminations happened in quick succession which gave organisers hope that they would not have to roll the blinds back when the final table is reached (a condition is in place for the tournament which states there must be a 30BB average on the 6-handed final table – probably to do with TV coverage).

First out the door with cash in his pocket was Danielle Mazzia, who had the misfortune to have his trip Aces bested by Gianluca Speranza´s turned flush. Then Marcello Montagner (A♠ K♠) also hit a flush to eliminate Francesco Delfoco (9♥ 9♣) and Giuseppe Pastura (9♣ 8♣) bust Davor Lanini (K♠ Q♠) in nineteenth position when flopping two pairs.

Looking ahead to Day 4 of the WPT Venice