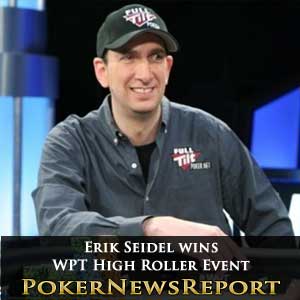 Erik “Sly” Seidel won the WPT High Roller title and is now in the Poker Hall of Fame with 8 WSOP bracelets, 2 WPT Championship titles and over $14 million in tournament earnings.

Seidel took down everyone in the $100,000 WPT High Roller event with a buy-in of $100,000. The pay off was $1 million. Seidel has been making headlines ever since he premiered as a professional tournament player.

His first shot at the WSOP Main Event in 1988 earned him a second-place finish to Johnny Chan. Seidel won his first WSOP bracelet in 1992 and 2007 saw him win his eighth. He finished 60 times in the money when playing in WSOP events.

Today’s win gives him $5.5 million in earning in 2011! He has earned four titles this year and all are in buy-in events of $25,000 or more. Before turning to poker, Seidel was a tournament backgammon player and he made cash in the stock market. Seidel goes back to the days of New York’s Mayfair Club, which turned out some of the best players ever, including Stu Unger, Howard Lederer and Dan Harrington.

Earlier this year, he got to the top of the all-time money list by wining $2.4 million in the Aussie Millions $250,000 Super High Roller event and $750,000 in the NBC Heads-Up Championship. It’s been a heck of a year for Siedel. It will be interesting to see how he does in this year’s WSOP. He’s certainly on an extra-hot streak.